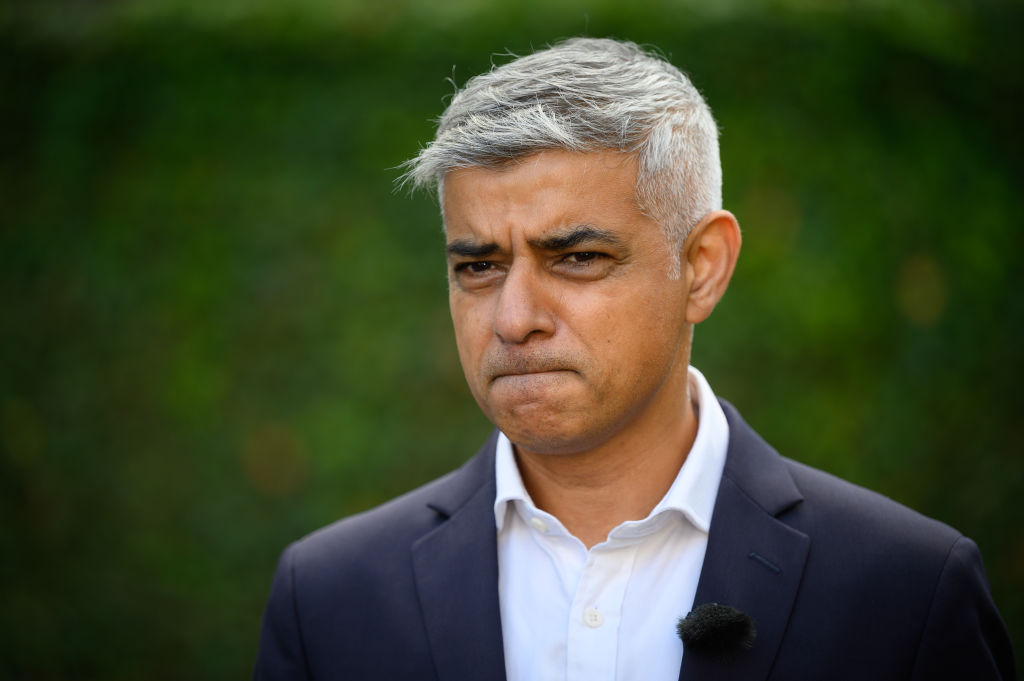 LONDON, ENGLAND – SEPTEMBER 23: Mayor of London Sadiq Khan speaks to members of the media following a photocall at Prior Weston primary school before delivering a speech on his plans to tackle climate change to environmental groups and members of the media at Barbican Centre on September 23, 2021 in London, England. The London Mayor warned that time is running out to act on the climate emergency. London has experienced soaring temperatures and unprecedented flooding this year which is only set to worsen, with six London Boroughs identified at risk of flooding and overheating in a recent report by City Hall and Bloomberg. Those being Hackney, Hammersmith & Fulham, Islington, Brent, Tower Hamlets and Newham. Also identified as at risk from flooding in the report are a quarter of London’s rail stations, 1 in 5 schools, nearly half of London’s hospitals and 200,000 homes and workplaces. With all school children in London attending schools with toxic air, the Mayor is looking to expand his Ultra Low Emission Zone to help reduce pollution and carbon emissions. (Photo by Leon Neal/Getty Images)

LONDON mayor Sadiq Khan on Wednesday (14) visited Waltham Forest where he unveiled a new plan that emphasises on a public health approach to end violence against women and girls.

There, he met a beautician and a dry cleaner and visited a library to see the training and education being given to men about his refreshed Violence Against Women & Girls (VAWG) Strategy – his re-election manifesto – to help them become active allies in his plan. The plan has prevention at the heart of its new public-health approach.

Cafes, libraries, dry cleaners, pubs and many other everyday public places across London are being encouraged to be part of Khan’s ‘whole society’ approach to tackle violence against women and girls. The approach will witness close to £18 million of additional investment from City Hall on specialist services to better the support system for the victims and survivors, handle the behaviour of the perpetrators and educate the public on how they can provide health.

The mayor’s newly refreshed strategy recognises that a robust policing or threat of the criminal justice system alone cannot prevent violence against women and girls. A more innovative approach is required – one that tries to understand the underlying drivers of harassment, abuse or violence against women and girls and brings public sector agencies together with communities to address them.

Khan’s new strategy will adopt a public health approach – similar to the one pioneered by his Violence Reduction Unit (VRU) — to preventing and reducing violence against women and girls.

As part of the mayor’s new plan, local authorities, the NHS, night-time venues, high street shops, transport for London and the transport industry, universities, the police and the criminal justice system will work more closely with support services tackling VAWG.

Khan on Wednesday committed an additional £17.7 million on top of a previous £100 million to continue the provision of specialist support services across London. This will ensure better help and support for all victims of VAWG including migrant victims and those from minority ethnic backgrounds, LGBTQ+ and other marginalised groups.

Besides, the mayor’s VRU is investing in a programme to provide intensive training for teachers and staff working with young people in schools through targeted support and mentoring, including guidance on healthy relationships.

Khan has overseen more than £100 million in investment in tackling violence against women and girls since he was first elected. This funding is working to save lives, address waiting lists and keep doors open for vital specialist support services for victims.

It is also helping to make venues, transport and public spaces in the capital safer for women at night, but it is clear more needs to be done.

A man kills a woman every three days in the UK, with a quarter of women reporting having been a victim of sexual assault, and 71 per cent of all women have experienced some form of sexual harassment in public space.
The mayor is adamant that we must not simply respond to male violence against women and girls – we must prevent it. That means focusing on holding the perpetrators of abuse accountable for their actions and for change.

Khan’s ‘Have a word’ campaign to target the words and actions of men and boys in public spaces to reject sexism and misogyny has found an impact. The campaign has hit over 14 million views and is shortlisted for the prestigious Cannes Lion Glass award for change.

McDonalds, The Roundhouse, Ministry of Sound, the O2, University of Greenwich, and University of London are among leading venues across the capital joining the campaign to push the message that: “Male violence against women and girls starts with words. If you see it happening, have a word with yourself, then your mates”.

The mayor is also investing in programmes that are focused on addressing and changing the behaviour of perpetrators of abuse. This includes programmes which deal with the behaviour of those perpetrating domestic abuse, or stalking, as well as launching the first-ever GPS tagging pilot 4 of domestic abuse offenders to quickly identify those who break their license conditions, helping to protect victims and crucially putting the onus on perpetrators to change their behaviour, rather than victims.

The strategy unveiled on Wednesday also recognises far that too many victims fail to get the justice that they deserve with too many cases falling out of the system before they reach court. The mayor is clear there must be improvements across all criminal justice services to improve trust and confidence in the policing and prosecution of VAWG.

“In my manifesto for re-election I pledged to do everything in my power to keep the women and girls in our city safe. I recognised that the approach we had taken on for so long – which focused on support for victims but not the behaviour of offenders – urgently needed to be reviewed,” Khan said.

“That’s why I’m proud to present my refreshed strategy for tackling violence against women and girls which adopts a public health approach to ending the scourge of VAWG on our capital.

“The epidemic of violence is a crisis which should shame us all which is why I’m uniting with partners across London to not only provide support to women and girls but to help educate and inform all Londoners, especially men, about the danger posed by misogynistic attitudes and behaviours.

“As well as record investment in services for victims and survivors, I am also funding initiatives which address the behaviour of those at risk of offending or reoffending to help prevent them turning to violence.

“Change will not happen overnight but I believe that together we can help to stop the men who wish to do women harm and drive forward a lasting change in our society’s culture so that women and girls can finally live their lives free from fear, harassment or abuse,” he added.

Claire Waxman OBE, Victims’ Commissioner for London, said, “I welcome this ambitious new strategy, which has looked right across society at the myriad ways violence against women and girls can manifest and takes a public health approach to breaking the cycles of abuse and violence.

“It is painfully clear that many women and girls in London have lost confidence in our justice system. I have personally spoken to many women and girls who felt disbelieved and dismissed by the police or unable to find the right support, so I am pleased to see a focus on rebuilding trust and confidence and the exploration of new support measures such as independent legal support for rape victims.

“Any policy relating to victims should be grounded in real, lived experiences and I was pleased to lead a survivor consultation to inform this strategy. This survivor consultation prioritised groups who are too often underrepresented and overlooked, including Black women and those impacted by so-called ‘honour-based’ abuse.”

Martin Griffiths, Clinical Director for Violence Reduction Network NHS London and Consultant Trauma and Vascular Surgeon at Barts Health NHS Trust said, “The Mayoral VAWG strategy marks a step change in the understanding and prevention of violence against women and girls in London. The NHS in London is an agent for change, playing a key role in the commissioning of Sexual Assault Referral Services, and services for victims of stalking. Working in partnership to support a public health approach the NHS will ensure that the obligation to build a fairer society for women and girls sits with us all.”

Councillor Jas Athwal, London Councils’ Executive member for Community Safety and Violence against Women and Girls, said, “To truly make London a safe place for all women and girls we need to take every opportunity to address the deeply damaging issue of violence against women and girls and co-ordinate our efforts across the city.
Grace Williams, Leader of Waltham Forest Council, said: “A woman is killed at the hands of a man on average every three days in the UK, not to mention the countless others subjected to abuse every day. Every single Londoner has a role to play in ending violence against women and girls, from understanding the services that support survivors to tackling misogyny in all its forms.”

Lucy, a survivor of domestic abuse, said, “It is really positive to see the direct action the Mayor, Waltham Forest and other places in London are taking to raise awareness and end violence against women and girls. The services available are inclusive, extensive and survivor led. It was these range of services that helped me realise I was in an abusive relationship and to exit it safely. I felt supported and understood and I hope other women feel the same through by using these vital locally led services.”

Andrea Simon, Director of the End Violence Against Women Coalition, said, “We welcome the new strategy, which we hope will see commitments translated into action that makes a tangible difference in women and girls’ lives.