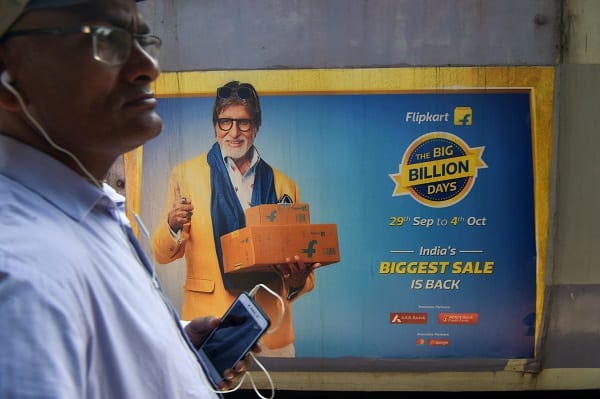 In this photograph taken on September 26, 2019, a commuter looks on as a train with advertisements of the upcoming festive sale of an online e-commerce portal featuring Bollywood actor Amitabh Bachchan passes by in Mumbai (Photo: INDRANIL MUKHERJEE/AFP/Getty Images).

E-COMMERCE giants Amazon and Walmart-backed Flipkart kicked off a crucial battle for shoppers on Sunday (29) ahead of India’s massive festive season as retailers search for a much-needed boost to sales amid a slowing economy.

October and November when much of India’s 1.3 billion population celebrates several major Hindu festivals and consumers traditionally go on spending sprees are critical for retailers, with some raking in almost half of their annual sales during the period.

But sales this year have been hit by falling consumer demand as a liquidity crunch crimps personal loans and unemployment soars to its highest level since the 1970s.

“Things are difficult,” Rakesh Kumar Yadav of the Federation of Sadar Bazar Traders Association, which represents some 40,000 wholesale traders in the capital New Delhi said.

Even aggressive pitches by Amazon and Flipkart, which have heavily invested in India’s budding e-commerce market, did not stop online consumer spending from slipping by around 20 per cent in the six months to June compared to last year, the Economic Times reported citing market research firm Kantar.

“The festival season is around the corner… and a lot of these corporates are coming up with various schemes to prop up demand and woo the consumers,” India Ratings principal economist Sunil Sinha said.

“But my own sense is that despite all the efforts, overall consumer sentiment is so down-and-out that we won’t see similar kinds of spending that we have seen in the past.”

With their deep pockets, Amazon and Flipkart are taking on India’s local family-run stores, known as “kirana” shops, that have dominated streets for decades.

Less than five per cent of India’s $600 billion retail market is online, but the sector is expected to expand to 8-9 per cent of the market by 2022 thanks to smartphone adoption and a rising middle class, according to RBC Capital Markets.

Amazon which recently opened a massive campus for 15,000 employees in the southern city of Hyderabad has taken out full-page newspaper ads to promote its “Big Indian Festival” sales and is offering discounts of up to 90 per cent.

Flipkart has Indian mega-star cricket Virat Kohli as the face of their “Big Billion Days” sales campaign and has slashed prices on fashion items and home appliances.

The two platforms which have almost 75 per cent market share of the e-commerce market hope to attract cash-strapped shoppers with financing options and have hired hundreds of thousands of temporary staff to cope with expected increased demand.

Bricks-and-mortar retailers are also ramping up their visibility to keep pace with the online behemoths.

“These are difficult times and consumer sentiment has been tilted towards the negative for some time now,” J. Suresh, the managing director of Arvind Lifestyle Brands, told the Economic Times about why the 1,300-store owner was increasing ad spending by up to 20 per cent this year.

Meanwhile, economists said a raft of recent government measures to revive the flagging economy, including a corporate tax cut, would improve sentiment in coming years.

“It’s a good beginning… The likelihood is that we’ve almost reached the bottom and if the government continues to do its bit and corporates remain upbeat because of these announcements, things will start looking up,” Sinha said.