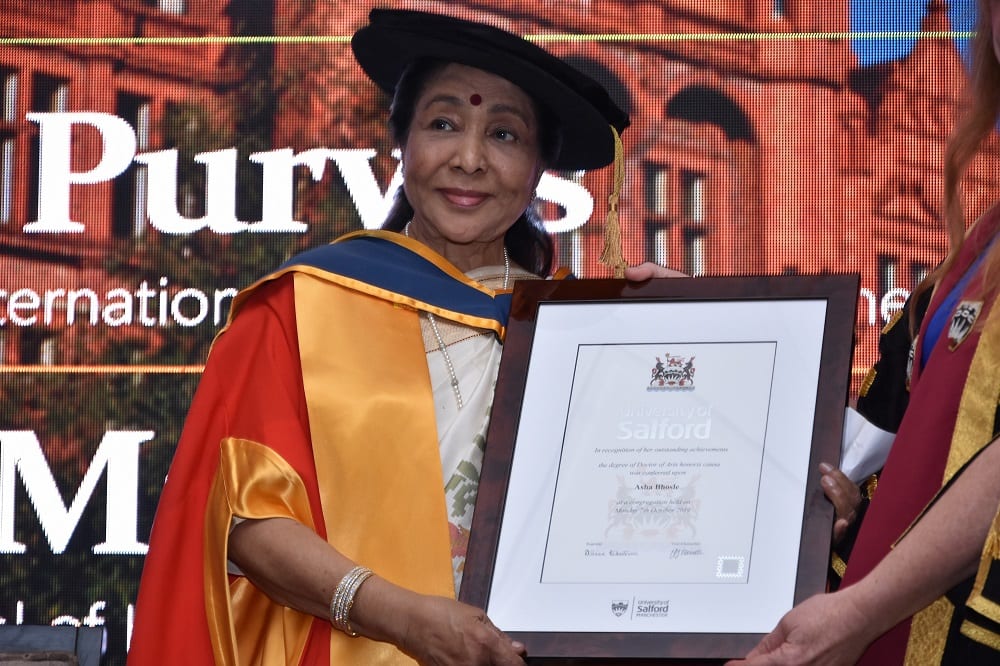 Asha Bhosle receives Honorary Doctorate from the University of Salford.

RENOWNED Bollywood singer Asha Bhosle was on Monday (7) awarded an Honorary Doctor of Arts degree by the University of Salford.

The honour was given for her contribution to the field of music and her role in inspiring future generations to participate in arts and media.

Over the course of her career, which spans seven decades, Bhosle has sung in more than 20 languages and recorded more than 22,000 songs – making fame in the Guinness Book of Records in 2011.

For her contribution to the arts, she was awarded the Dadasaheb Phalke Award in 2000 and the Padma Vibhushan in 2008.

Presenting the honour at a ceremony in the Saint Regis Hotel in Mumbai, India, Jo Purves, Pro Vice-Chancellor at the University of Salford said: “Asha’s achievements as a musician cannot be understated. Throughout her career, Asha has left a lasting impression in the industry by transforming traditional Hindustani music to inspire future generations across all nations to get involved in arts and the media. We’re truly delighted to be honoring Asha for her accomplishments whilst celebrating her influence on modern British culture.”

Bhosle said she was “overjoyed” to be recognised by an international educational institution.

She said: “This is my first doctorate from a major UK university and I feel overjoyed that my contribution to music has been recognised by an international educational institution. I hope it inspires musicians all over the globe.”

The University of Salford has a long history of supporting Indian culture. The degree was awarded as part of a series of announcements made by a 30-strong delegation from Greater Manchester.

The delegation was led by the Manchester India Partnership, which was set up in 2018 to celebrate and strengthen the ties between the UK and India in the fields of education, culture, trade, investment and tourism.