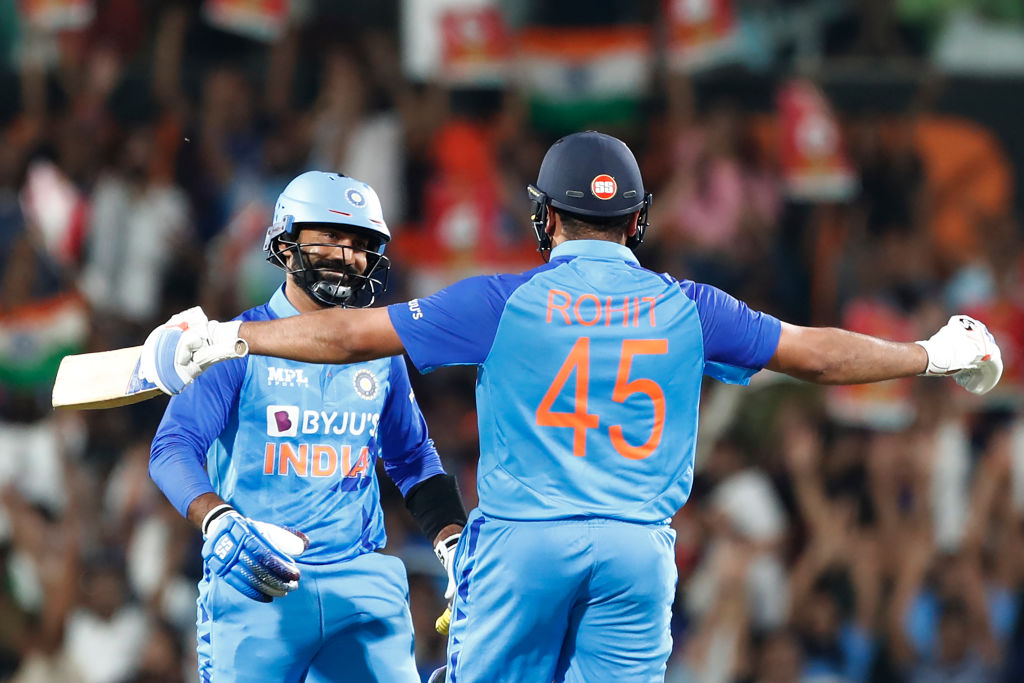 India batters Dinesh Karthik and Rohit Sharma of celebrate the victory during game two of the T20 International series against Australia at Vidarbha Cricket Association Stadium on September 23, 2022 in Nagpur, India. (Photo by Pankaj Nangia/Getty Images)

India roared back into the three-match T20 international series against Australia at Vidarbha Cricket Association Stadium in Nagpur on Friday (23) by defeating the world champions by six wickets in a rain-curtailed game. Australia scored 90 for 5 in eight overs, a total which India overhauled with four deliveries and six wickets to spare.

India captain Rohit Sharma won the toss after a wet outfield caused by rain delayed the match’s start by two hours and chose to field first. The game was reduced to an eight overs a side affair and Australia had no other option but to go after the bowling from the word go. Australia skipper Aaron Finch (31 off 15 balls, including four fours and one six) made a brisk start but was castled by Jasprit Bumrah, who made his comeback into the national side after a while and came to bowl at second change.

The only other significant knock for the Australians came from Matthew Wade, the wicket-keeper-batter and hero of the last game in Mohali, as he remained not out on 43 off 20 balls with three fours and four sixes. Spinner Axar Patel, who opened the bowling with Hardik Pandya, took two wickets while two Australia batters were run out.

Sharma stood tall for the Indians with 46 not out in 20 balls (four fours and as many sixes) and despite losing partners in KL Rahul (10 off six), Virat Kohli (11 off six), Suryakumar Yadav (zero off one), and Pandya (nine off nine), he ensured that India reached home. The hosts needed 14 runs off the last seven balls and Dinesh Karthik hit an unbeaten 10 off two balls to make it easy for India to level the series.

Spinner Adam Zampa was the most successful bowler for Australia with three wickets for 16 runs, including the one of Kohli who he has now dismissed eight times in white-ball cricket.

Sharma was picked as the player of the match.

The two teams now proceed to Hyderabad for the decider on Sunday (25).