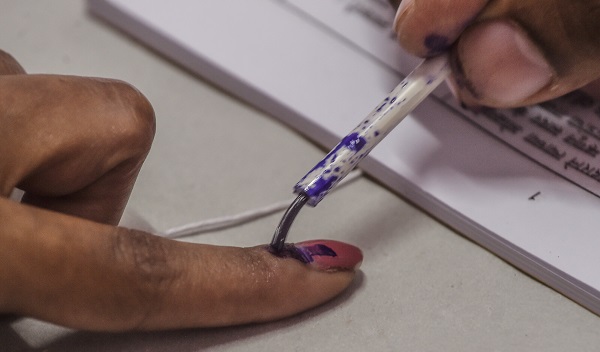 A first time Indian voter gets her finger inked with indellible ink – as a sign of voting – while casting her vote at a polling booth in Mumbai on April 29, 2019 (Photo: INDRANIL MUKHERJEE/AFP/Getty Images).

WEEKS after getting Indian citizenship, around 25 Sindhis, who migrated from Pakistan years ago and made Pimpri-Chinchwad their home, had another reason to celebrate when they got an opportunity Monday (29) to cast their votes for the first time.

One of them, Rajendra Thakur, migrated to India from Pakistan 37 years ago. Today, Thakur looked a happy man after voting for the first time in India.

The 52-year-old is among nearly around 25 Sindhis from the Pimpri-Chinchwad area, that falls under the Maval Lok Sabha constituency, who voted for the first time.

Those who exercised their franchise for the first are among the 45 Sindhis from the city who got permanent citizenship of India early last month.

“It has been over 37 years that I have been living in Pimpri-Chinchwad. All those years, except discussing politics, I could not take part in any democratic process such as election and could not cast my vote.

“But today, for the first time, I voted,” said an elated Thakur, who is into the business of supplying electrical items.

He said several Sindhis have migrated to India from Pakistan over the years for a better future and all of them, including himself, had been living on long-term visas (LTVs) till they became Indian citizens after a prolonged wait.

These visas needed to be renewed after every two years and the process was very lengthy and tedious, he said.

“It was Balasaheb Runwal of Mere Apne Foundation, who all those years fought for our cause. Credit also goes to Pune collector Naval Kishore Ram who expedited the process to issue citizenship certificates in March,” said Thakur.

“I came to India in 1982 along with my sister when I was 15 as the situation back in Karachi was not good.

“When we got the Indian citizenship certificates in March, we felt like winning a long-fought war and I can not express my happiness in words after casting my vote,” he added.

Dr Vijay Bulani has a similar story to tell as he, too, was among the voters.

“I am very happy that we got a chance to participate in the democratic process of our country,” he said.

The district collector Ram said the applications of all these people were pending before him.

“I decided to look into the long-pending issue and expedited the entire process of issuing permanent citizenship certificates by bringing all authorities concerned together.

“And in one go, all these people were issued their citizenship certificates,” the bureaucrat said.

He said while issuing the certificates, the district administration also got them to fill their voter registration forms and it is good that out of 45, 25 people could vote.

Runwal said these people had faced many hardships as they used to run from pillar to post to get their LTVs renewed.

“So I decided to take up the issue through my organisation and followed it up with several authorities, including the Union home ministry. In all this process, BJP’s Pune MP Anil Shirole helped me,” he said.

Runwal said the district collector expedited the entire process to issue the certificates.

“Now after these 45 people, there are more 200 applications from the city are in the pipeline and we are sure that all these people will get their permanent citizenship certificates soon,” he added.