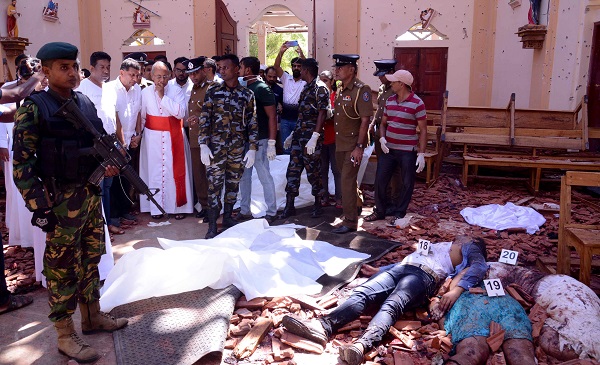 Sri Lankan soldiers and religious members of the parish look on inside the St Sebastian’s Church at Katuwapitiya in Negombo on April 21, 2019, following a bomb blast during the Easter service that killed many (Photo: STR/AFP/Getty Images).

SRI LANKAN officials said today (22) that at least six Indian nationals were killed in a series of eight powerful bomb blasts, including suicide attacks in the island nation.

The worst attack in a decade hit three churches and luxury hotels on Easter Sunday (21).

The death of P S Rasina (58), a resident of southern Indian state of Kerala was confirmed on Sunday (21).

Around 500 people, including Indians and other foreign nationals were injured in the series of blasts and suicide attacks.

The bomb blasts targeted St Anthony’s Church in Colombo, St Sebastian’s Church in Negombo, and another church in Batticaloa on Sunday (21) morning.

Three explosions were reported from the five-star hotels – the Shangri-La, the Cinnamon Grand, and the Kingsbury.