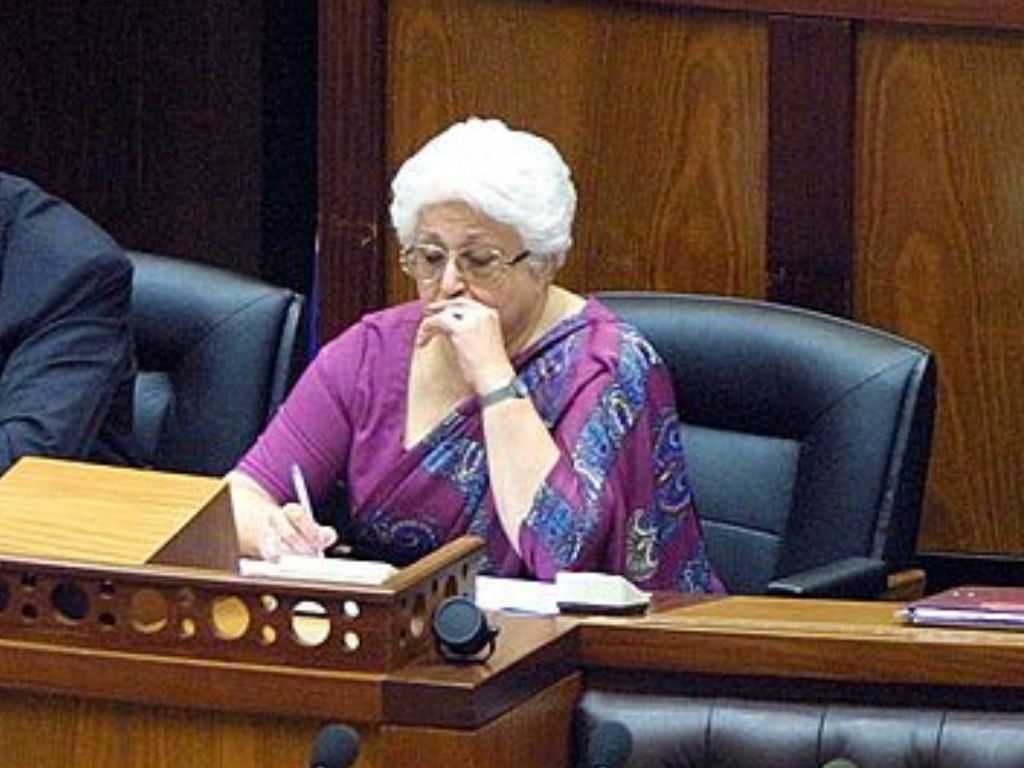 Frene Ginwala (1932-2023) in 2001, when she was the speaker of the National Assembly of South Africa. (Photo by ANNA ZIEMINSKI/AFP via Getty Images)

President Cyril Ramaphosa confirmed in a statement that Ginwala had died at her home on Thursday (12) evening.

President @CyrilRamaphosa wishes to announce, with great sadness, that Dr. Frene Ginwala, founding Speaker of South Africa’s democratic Parliament and Esteemed Member of the Order of Luthuli, has passed away. https://t.co/E1dSzfbACU#RIPFreneGinwala pic.twitter.com/B6qAskfb0T

She suffered a stroke and died a fortnight ago.

A grandchild of one of the very few Parsi families who had emigrated from India, Ginwala’s parents sent her to study in the UK before they left South Africa to settle in Mozambique.

After the African National Congress (ANC) was banned and its High Command leaders arrested by the apartheid government in 1963, Ginwala helped many prominent members of the ANC.

Our deepest condolences to the Ginwala family & friends.

Frene Ginwala was the first Speaker of the National Assembly in democratic SA.

She presided over a Parliament that repealed many Apartheid laws and contributed to the drafting of the Constitution. May she rest in peace. pic.twitter.com/tDzdKyj68U

Among them were former president Nelson Mandela and others who would later become leaders in the post-apartheid government.

She also helped set up the ANC in exile in Tanzania.

Ginwala was South Africa’s first parliamentary speaker after Mandela became the first democratically elected president of the country in 1994.

“On behalf of the nation and of the legislative, executive and judicial components of the State, (I offer my) sincere condolences to Dr Ginwala’s family, her nephews Cyrus, Sohrab and Zavareh, and their families,” Ramaphosa said.

Born on April 25, 1932, Ginwala served the anti-apartheid struggle and South Africa’s democratic dispensation in a diversity of roles as a lawyer, academic, political leader, activist and journalist.

In the same year, Ginwala joined several other veterans of the fight against apartheid to receive the ‘Distinguished Service to Society’ award from the Congress of Business and Economics, which had its roots in the erstwhile Transvaal Indian Congress. Ramaphosa said that many of the rights and material benefits South Africans enjoy today have their origins in the legislative programme of the inaugural democratic Parliament under Dr Ginwala’s leadership.

“Frene Ginwala epitomised the ethos and expectations of our then fledgling Constitution and played an important role in building the capacity of Parliament through the transformation of activists and leaders into lawmakers who were, in turn, able to transform our country,” Ramaphosa said.

“Beyond African shores, she positioned our young democracy both as one that had as much to contribute to as it had to learn from global precedents and experience,” he said.

Among her diverse activities was serving on the Board of Directors of the Inter-Parliamentary Union. Ramaphosa said the government would respect the wishes of the family to have a private funeral, but details of a memorial service would be announced soon.