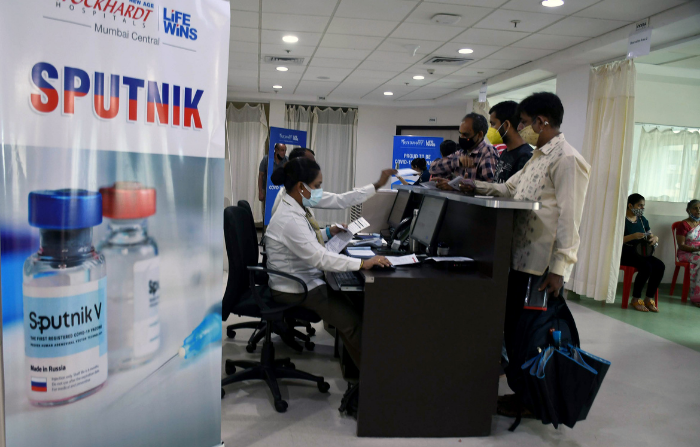 Beneficiaries wait to get Russian coronavirus vaccine Sputnik V against COVID-19 at a hospital in Mumbai in India. (ANI Photo)

IN a complete reversal of the coronavirus vaccine situation in India, some of the country’s private hospitals have scrapped orders for the Russia-made Sputnik V jab as they are struggling to sell the vaccines amid growing supplies of free doses of other vaccines that the Narendra Modi government has offered.

According to a report by Reuters, industry officials said low demand and the extremely low temperature required for keeping the jabs have made at least three big hospitals cancel the orders for Sputnik V, which is sold only on the private market in India, the world’s largest vaccine-producing country.

“With storage and everything, we have cancelled our order for 2,500 doses,” Jitendra Oswal, a senior medical official at Bharati Vidyapeeth Medical College and Hospital in Pune, where the world’s largest vaccine-making company Serum Institute of India is located, was quoted as saying by Reuters.

“Demand is also not great. There is a class of people, barely 1%, that wanted to go for Sputnik. For the rest, anything would do,” he said.

Since May till last week, private hospitals in India accounted for only six per cent of all vaccines administered in the country despite the government having allowed them to buy a quarter of domestic output, the country’s health ministry data showed.

India is set to become a major production centre of Sputnik V with a planned capacity of about 850 million jabs a year. Low domestic demand could mean higher exports, something the vaccine’s backers are already pushing for.

Since a launch event in June by Indian distributor Dr Reddy’s Laboratories Ltd, India has seen only 943,000 doses of Sputnik getting administered by hospitals, considered much less when compared to more than 876 million vaccines given countrywide.

Dr. Reddy’s, which has imported about 3 million doses of the Russian vaccine and refunded hospitals for cancelled orders, did not respond to a query from Reuters.
Its partner Russian Direct Investment Fund, which markets Sputnik V internationally, also did not comment.

India’s vaccination drive mainly features AstraZeneca (the India-made version is called Covishield), which can be stored in regular refrigerators, unlike Sputnik V, which needs minus 18 degrees Celsius (less than minus one degree Fahrenheit) temperature, something which is difficult to ensure in India. The vaccine is also 47 per cent more expensive than AstraZeneca in the private market.