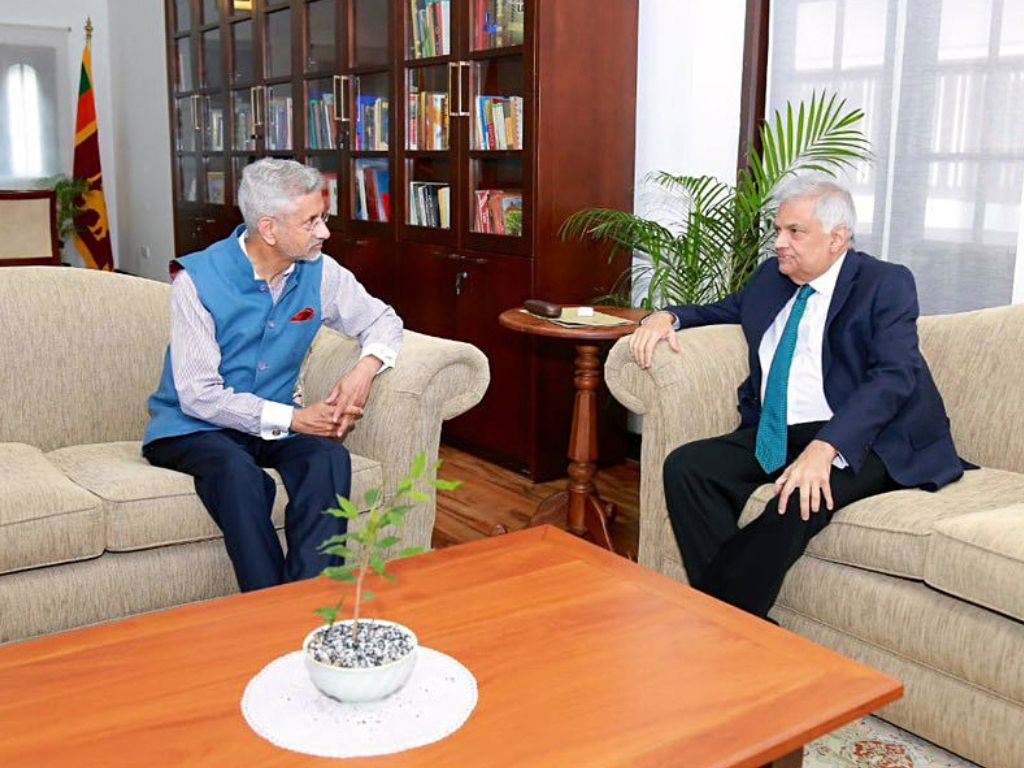 Sri Lanka on Friday (20) thanked India for the generous support of a $3.9 billion (£3.15 billion) credit line last year and the assurances given to the IMF to restructure the country’s debt after India’s external affairs minister Subrahmanyam Jaishankar conveyed India’s commitment to increase investment flows to hasten the debt-ridden island-nation’s economic recovery.

Jaishankar, who is here on a two-day visit, on Thursday (19) met Sri Lanka’s top leadership, including his Sri Lankan counterpart Ali Sabry and president Ranil Wickremesinghe.

Glad to join President Ranil Wickremasinghe in inaugurating projects that emphasize India’s deep and abiding friendship with the people of Sri Lanka.

“It was my privilege to welcome my friend Hon EAM of India Dr S. Jaishankar in Colombo. I thank him for the generous support of the USD 3.9B credit line last year and the assurances given to the IMF to restructure the debt. Sri Lanka is fortunate to have caring and considerate friends!” Sabry tweeted on Friday.

Discussed our bilateral cooperation including in transport and education. Also exchanged views on intensifying people to people relations. pic.twitter.com/vrnfmnQgnW

“A pleasure to meet with Hon Dr S. Jaishankar, Minister of External Affairs of India in Colombo. Discussed strengthening the bilateral relationship between our nations, people-to-people contacts, trade and investment ties and appreciated India’s steadfast assistance for Sri Lanka,” he tweeted on Thursday.

Jaishankar, who arrived in Colombo from the Maldives on the second leg of his two-nation tour, met Sabry and discussed issues of mutual and regional interests.

President Wickremesinghe hosted a working dinner for the minister.

“Look forward to my discussions with the leadership tomorrow morning,” Jaishankar tweeted after he held talks with Sabry, as India informed the IMF its assurance which the global lender wants from creditors for providing a much-needed bailout to the cash-strapped island nation.

Sri Lanka, which is trying to secure a $2.9 billion (£2.3 billion) bridge loan from the International Monetary Fund (IMF), was negotiating to get financial assurances from its major creditors – China, Japan and India – which is the requisite for Colombo to get the bailout package. The IMF bailout has been put on a halt as Sri Lanka pursues talks with creditors to meet the global lender’s condition for the facility.

“Conveyed our commitment to increase investment flows to Sri Lanka to hasten its economic recovery,” Jaishankar tweeted after his meetings.

Sri Lanka’s unprecedented economic crisis had paradoxically brought the best out of India’s concerns for its southern neighbour given the island nations’ proximity in economic cooperation with China until then.

When the crisis started to bite a year ago, India came forward with assistance worth $4 billion (£3.23 billion). On Tuesday (17), Wickremesinghe told Parliament that his government has “successfully” completed its debt restructuring talks with India.

India’s additional secretary of the finance ministry Rajat Kumar Mishra on Tuesday informed IMF chief Kristalina Georgieva that New Delhi has confirmed its support to Sri Lanka on the issue of debt restructuring.

Last week, Sri Lanka completed its debt restructuring talks with Japan. Sri Lanka began debt restructuring talks with its creditors in September last year as warranted by its agreement with the IMF for the $2.9 billion facility over four years. It began negotiating with the IMF for a bail-out after having announced its first-ever sovereign debt default in April last year.

The IMF facility would enable the island nation to obtain bridging finance from markets and other lending institutions such as the ADB and the World Bank. Jaishankar incidentally became the first foreign dignitary during the economic crisis to visit Sri Lanka. His visit in March last year at the height of the crisis assured Sri Lankans that India’s ‘Neighbourhood First’ policy was pretty much in play.

“Sri Lanka is a close friend and neighbour, and India has stood with the people of Sri Lanka at all times,” the Ministry of External Affairs said in New Delhi on Tuesday. Jaishankar’s visit to Colombo is a testimony to the importance that India attaches to its close and friendly relations with Sri Lanka, it said.

Sri Lanka was hit by an unprecedented financial crisis in 2022, the worst since its independence from Britain in 1948, due to a severe paucity of foreign exchange reserves, sparking political turmoil in the country which led to the ouster of the all-powerful Rajapaksa family.