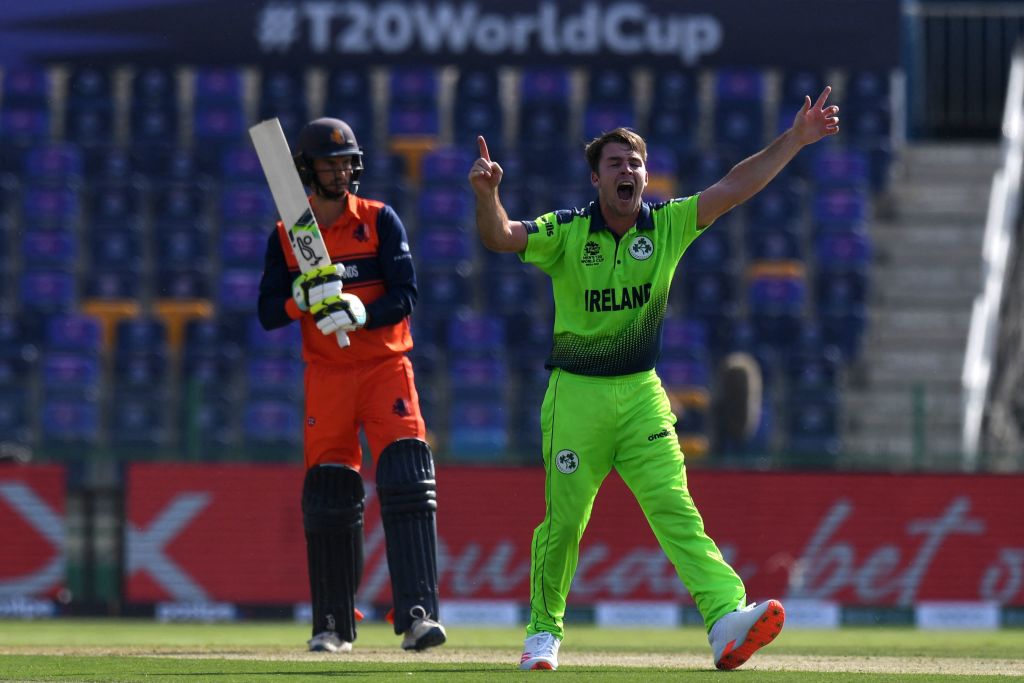 Ireland’s Curtis Campher celebrates after taking the wicket of the Netherland’s Scott Edwards in a game at the T20 World Cup at Sheikh Zayed Stadium in Abu Dhabi, the UAE, on October 18, 2021. (Photo by INDRANIL MUKHERJEE/AFP via Getty Images)

IRELAND made an impressive start to their T20 World Cup campaign in the United Arab Emirates on Monday (18) when they defeated a lower-ranked Netherlands in an all-European Group A game by seven wickets to inch towards qualification for the Super 12 stage.

For the Irish, the hero of the game was medium pacer Curtis Campher who claimed four wickets in as many deliveries to break the Dutch batting line-up and restrict them to 106 runs, a moderate target that Ireland overhauled with nearly five overs to spare. Opener Paul Sterling scored 30 not out off 39 balls while Campher came out to bat at No.5 to remain unbeaten on seven off seven to take their team home. Campher was adjudged the player of the match. Ireland lost their second wicket at 36 but Gareth Delany (44 off 29) added 56 runs with Sterling for the fourth wicket to take the side close to win. For the Netherlands, Fred Klaasen, Brandon Glover and captain Pieter Seelaar took one wicket each.

Earlier, the Netherlands won the toss and elected to bat at the Zayed Cricket Stadium in Abu Dhabi but a disciplined bowling display from the Irish bowlers saw them failing to post a competitive total. Just when opener Max O’Dowd (51 off 47) and Colin Ackermann (11 off 16) tried to rebuild the innings by adding 29 runs for the third wicket after the Netherlands were reduced to 22 for 2, the 22-year-old Campher struck.

October 24 Pakistan game just another outing for us

In the 10th over of the innings, he removed Ackermann, Ryan ten Doeschate and wicket-keeper-batsman Scott Edwards to take a hat-trick and then added Roelof van der Merwe to the list of his victims to leave the Dutch reeling at 51 for 6. Campher ended up with four for 26 in four overs. He became only the third bowler in T20Is to take four wickets in four balls after Afghanistan’s Rashid Khan and Sri Lanka’s Lasith Malinga. Campher made his T20I debut in August and had three wickets in four games till the start of this game.

O’Dowd and Seelaar then added 37 runs for the seventh wicket to help their team cross the three-figure mark.

Seamer Mark Adair also had an impressive outing as he picked three wickets for only nine runs in four overs. Josh Little took one wicket while two Dutch batters were run out.

Former champions Sri Lanka and debutants Namibia are the other two teams in the group.

The tournament kicked off on Sunday (17) and in the very second game, Test-playing nation Bangladesh lost to Scotland by six runs despite having cornered them at 53 for 6 at one stage. Co-hosts Oman thumped Papua New Guinea by 10 wickets in another match.

Ireland take on Sri Lanka while the Netherlands play Namibia in Abu Dhabi on Wednesday (20).