There Will be No Margin For Error Against India: Kallis 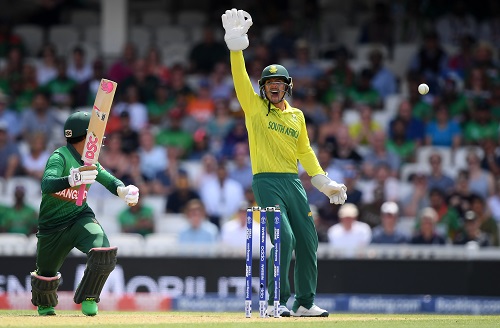 Mushfiqur Rahim of Bangladesh scoops as Quinton De Kock of South Africa appeals during the Group Stage match of the ICC Cricket World Cup 2019 between South Africa and Bangladesh at The Oval on June 02, 2019 in London, England (Photo: Alex Davidson/Getty Images).

SOUTH AFRICA have no margin for error after second World Cup loss and should take advantage of India’s ‘first game nerves’ to bring their World Cup campaign back on track, said legendary all-rounder Jacques Kallis.

South Africa, who were thrashed by England in the opening match, suffered their second successive loss in the World Cup, going down by 21 runs against Bangladesh on Sunday (2).

Kallis believes the Proteas will be under a lot of pressure ahead of their clash against favourites India.

“It’s disappointing and frustrating and there is lots of pressure on the next game, otherwise the tournament could be over before it’s really started for South Africa,” Kallis wrote in a column for the ICC.

“It doesn’t get any easier though against India but it’s their first game and our third, so maybe that could give us the edge we need,”

“They’ve not played for a week and maybe they’ll be some first game nerves, where as we are settled.”

The 43-year-old from Cape Town said India will make South Africa pay if they commit any silly mistake.

“We’ve got to play all our cards and we can’t afford any more silly mistakes at vital stages – these are the best sides in the world and they’ll always punish you,” Kallis wrote.

“Strange things happen in this sport and if we can get a win then I think we can go on a streak and we are still good enough to be a contender.”

“There will be no margin for error though. I think you’ll need six wins, maybe five with a really good run rate, to finish in the top four, so South Africa almost need to win every game they will play.”

South Africa is battling injury issues with pacer Lungi Ngidi being ruled out of India clash due to a hamstring strain and Kallis feels experienced Dale Steyn needs to be drafted into the playing XI.

“The injury to Lungi Ngidi certainly didn’t help Faf, he’s a world-class player and a big part of our attack. You’ve got to play Dale Steyn against India now, and hopefully he is close to fitness,” Kallis wrote.

Bangladesh posted their highest ODI total, scoring 330 for six at the Oval after South Africa skipper Faf du Plessis elected to bowl after winning the toss.

South Africa then fell short at 309 for eight while trying to become the first team to successfully chase more than 330 in a World Cup match.

Kallis wrote: “Bangladesh got all their partnerships going and once you get over 300 then it always become a tough chase, letting them score 50 or so runs in the final four overs really didn’t help either and ultimately proved the difference.

“I understand what Faf du Plessis was doing with the toss and playing the extra pace bowler. However, the wicket just didn’t allow it and perhaps he stuck with the tactics a bit too long and should have started bowling a little fuller and straighter.

“It’s great having a game plan but you need to have a back-up when it’s not working, I felt we were one step behind the entire match and just tactically a bit off. We need to be a bit smarter.”