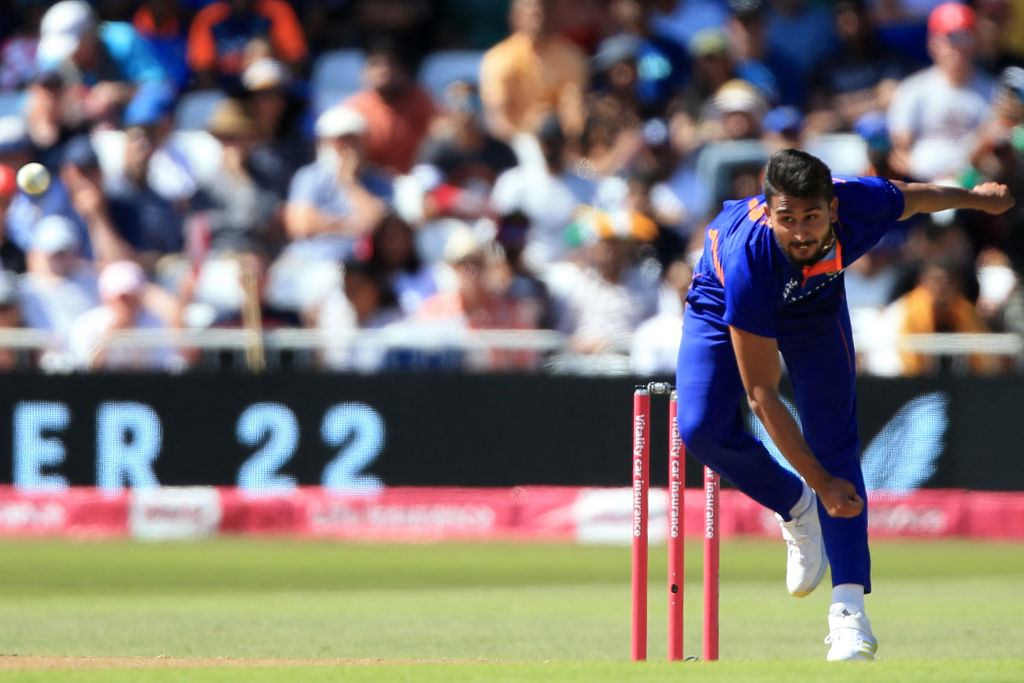 India’s Umran Malik bowls during the ‘3rd Vitality IT20’ Twenty20 International cricket match between England and India at Trent Bridge in Nottingham, central England on July 10, 2022. (Photo by LINDSEY PARNABY/AFP via Getty Images)

FORMER England seamer Darren Gough has backed young India fast bowler Umran Malik to make the Men in Blue squad for the T20 World Cup in Australia later this year. The 22-year-old bowler generated some sensational pace in the Indian Premier League (IPL) this year by regularly clocking over 150 kilometres per hour.

Malik, who was born in Srinagar in Jammu and Kashmir, was called for his maiden national cap after the IPL show and he made his debut against Ireland in a T20 international recently and played a game in the same format against England. The youngster though gave away a lot of runs and could pick only two wickets. However, Gough still feels that Malik should be a part of their T20 squad bound for the marquee tournament Down Under for he thinks the Asian side could really benefit from the pace that he generates.

“(Jasprit) Bumrah, I think he is the best all-format fast bowler in the world. He is your first pick, the golden pick. Bhuvneshwar Kumar comes in because of his skill with the new ball. He is really important to take early wickets, slows the momentum down. We have seen that throughout the England vs India series. So, I think he has to be on there,” the 51-year-old Gough, who picked more than 450 international wickets including two in the T20s, said in video uploaded on Cricket.com YouTube channel.

The former cricketer also said while he would consider pacers Prasidh Krishna and Arshdeep Singh, Malik should be an automatic pick for him for the World Cup.

“(Mohammed) Siraj has got good pace. I have been impressed with him when I saw him bowl in Australia and when I saw him in India. Then you’ve got Umran Malik. Anybody who bowls that speed gets into my squad. On the pitches in Australia, you might just need that extra bit of pace to shock the opposition,” he added.

“But India have got so many options, Shami is another player with so much skills with the new ball. Then there is Prasidh Krishna. There is plenty of options but I would have Umran Malik, Siraj, Bhuvneshwar and Bumrah,” Gough added.