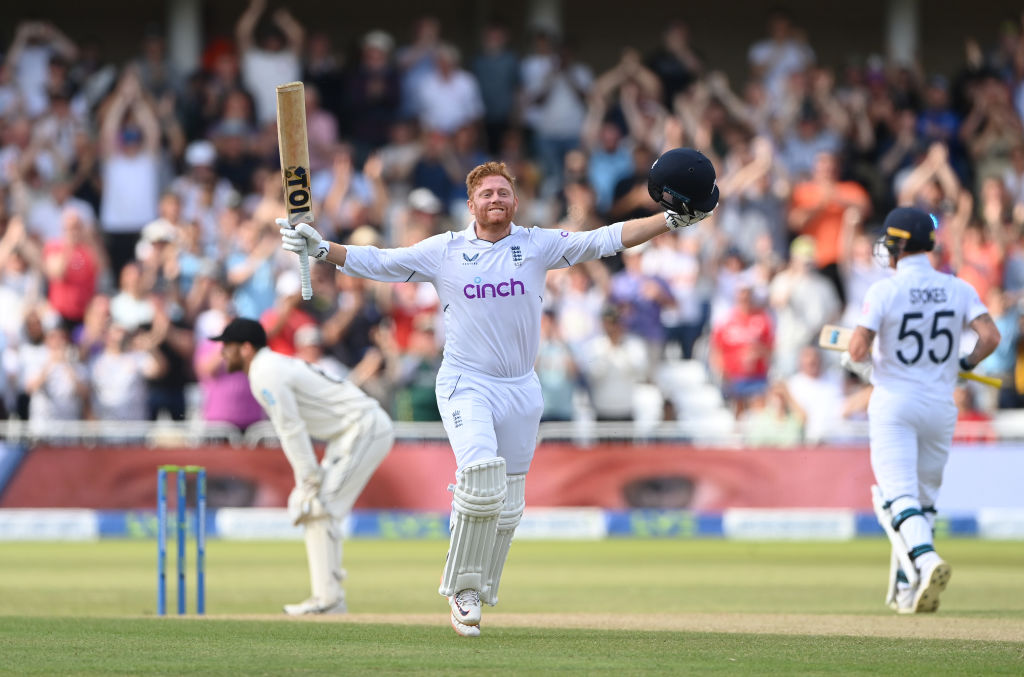 England batsman Jonny Bairstow celebrates his century during Day 5 of the Second Test Match between England and New Zealand at Trent Bridge on June 14, 2022 in Nottingham, England. (Photo by Stu Forster/Getty Images)

SOME unbelievable hitting from England batters saw the second Test between England and New Zealand at Trent Bridge took a sensational turn in the dying hours and the home team eventually had the last laugh like the way they had at Lord’s.

Jonny Bairstow blasted 132 off 96 balls while skipper Ben Stokes scored an unbeaten 75 in 70 balls as the Three Lions plundered runs in the final session of the final day to overhaul the target of 299 with 5 wickets to spare.

The win gave England an unassailable 2-0 lead over the Kiwis in the three-match series.

Bairstow and Stokes came together with England reeling at 93 for 4. But they not only put up a partnership but also at a jet speed which eventually did the trick for them. The duo added 189 runs in just over 20 overs and after Bairstow fell, Stokes completed the rout along with Ben Foakes, who remained not out on 12.

The gates at the venue were opened for the fans to allow the match for free.

Both teams scored 500-plus totals in their first innings which made the game look like a certain draw. But New Zealand’s collapse in the second innings brought it back to life and England batters ensured that they did not waste the outside opportunity that they had to clinch their first Test series win since January 2021.

England won the first Test by 5 wickets. The third and final Test will be played at Headingley from June 23.