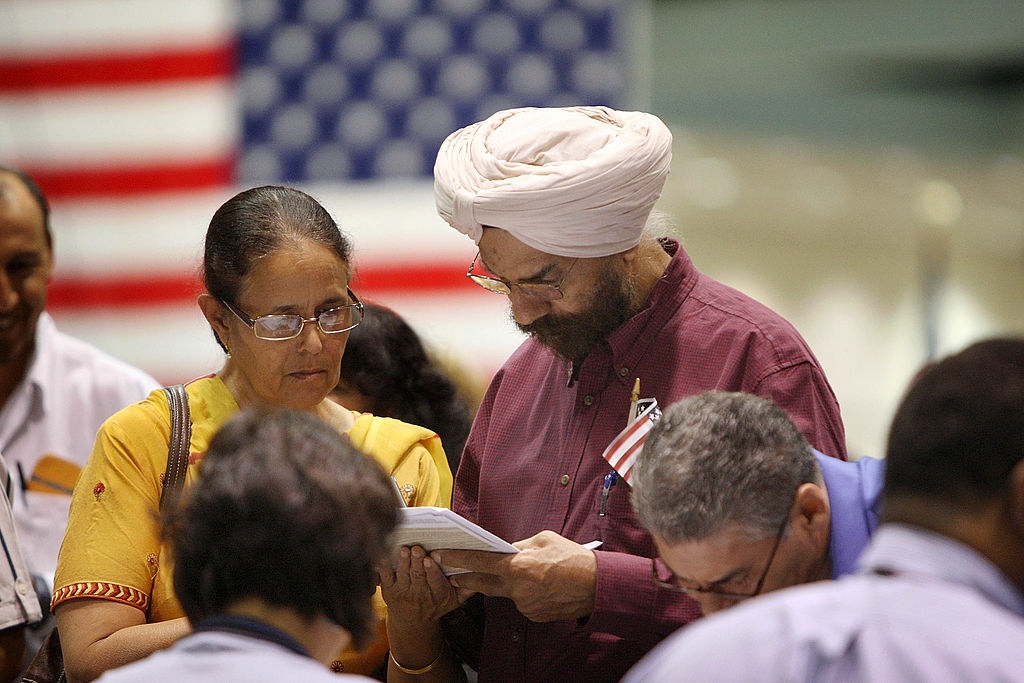 A Sikh couple from India in Los Angeles, California, the US. (Photo by David McNew/Getty Images)

US authorities were investigating claims of human rights activists that turbans of nearly 50 Sikh asylum seekers were confiscated after they were detained along the country’s border with Mexico, according to media reports.

Sikhism requires men to wear turbans and do not cut their hair.

According to human rights activists, nearly 50 Sikh migrants have had their religious headgear taken away by Border Patrol agents recently.

“We take allegations of this nature very seriously,” Customs and Border Protection (CBP) Commissioner Chris Magnus was quoted as saying in a statement to ABC News on Wednesday (3). Magnus added that the agency immediately began taking steps to address the allegations after they were raised in June.

“Our expectation is that CBP employees treat all migrants we encounter with respect. An internal investigation has been opened to address this matter,” he said.

“We write to inform you of ongoing, serious religious-freedom violations in the Yuma Border Patrol Sector, where your agents are confiscating turbans from Sikh individuals during asylum processing,” the ACLU wrote to CBP Commissioner Magnus on Monday (1), The Hill reported.

“In the last two months alone, our organisational partners in Arizona have documented nearly 50 cases of asylees arriving from Yuma who reported that their religious headwear had been taken by US Customs and Border Protection (CBP) and never returned or replaced,” the letter added.

However, the letter did not mention the nationalities of the Sikh migrants.

Lawyer Vanessa Pineda, of the ACLU of Arizona, told the BBC that no proper explanation has been given about what – if any – security concerns a turban could raise.

She said it is part of a wider situation where the personal property of migrants is being confiscated and disposed of without explanation or replacement.

“It’s just not acceptable,” she said, adding that the authorities should find another alternative and to stop this. “It’s dehumanising,” Piineda said.

The ACLU noted in its letter that it was not the first time it had raised concerns over Sikhs’ turbans being taken away, saying it had raised a similar issue in March 2019 to the CBP and others.

According to NBC News, violence against Sikh Americans has captured a national audience in recent years, with advocates pointing to the demonisation of the turban post-9/11.

In April 2021, a gunman at a FedEx facility in Indianapolis killed four Sikh workers. Since then, New York City has had several attacks on Sikh residents, many of which involved their being stripped of their turbans. “There is simply no excuse for refusing Sikhs the right to wear their turbans,” the report said, quoting the ACLU’s letter.

“Robust protections for religious exercise are crucial in settings where individuals are in government custody…Yuma officials must cease their practice of confiscating turbans or any other religious headwear,” the letter said.