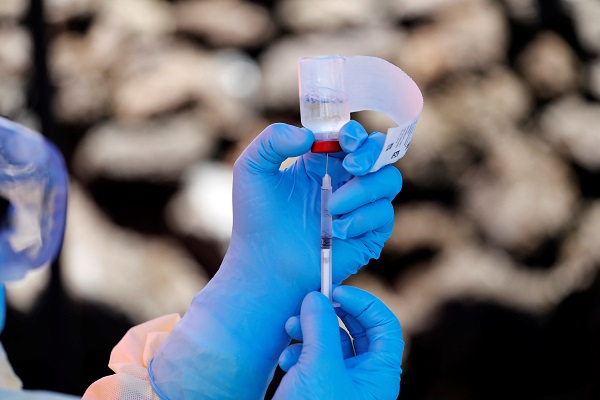 A health worker fills a syringe with Ebola vaccine before injecting it to a patient, in Goma, Democratic Republic of Congo, August 5, 2019 (REUTERS/Baz Ratner).

UGANDA has started its largest-ever trial of a preventive Ebola vaccine, an official said on Monday (5), amid fears of a potential spillover of the deadly hemorrhagic fever from neighbouring Democratic Republic of Congo.

The East African country has been on high alert since two people, part of a family visiting from Congo, died of the disease. A third member of the family also died after returning back home.

Ebola has killed more than 1,800 people in Congo in its latest outbreak in the central African country, which began a year ago and has become the second-worst on record.

Rwanda, which also neighbours Congo and Uganda, is on high alert after the disease spread to the Congolese town of Goma, a bustling trading hub near their border.

In Uganda, the vaccination project’s lead researcher Pontiano Kaleebu told the two-year trial would involve 800 people in Mbarara district in the southwest of the country.

Participants will be picked from core health workers such as physicians, clinicians, nurses and pharmacists, and non-core personnel: cleaners, mortuary attendants and surveillance, ambulance and burial teams.

“Developing effective vaccines and treatments against Ebola are…global public health priorities. In this trial we hope to avail more information that will help us work towards having a licensed Ebola vaccine,” Kaleebu said.

The trial, to be carried out by both Ugandan and international researchers, is backed by London School of Hygiene and Tropical Medicine.

The vaccine involved – Ad26.ZEBOV, MVA-BN-Filo – is manufactured by Belgium-based Janssen Pharmaceutica, and the researchers will seek to assess its safety and ability to provoke an immune response to fight the disease.

Uganda has been hit by multiple outbreaks of Ebola and Marbug, another infectious and high-fatality hemorrhagic fever, in the past.

Deaths from the outbreaks, however, have been mostly limited due to quick diagnoses at the Uganda Virus Research Institute and an effective donor-funded response mechanism.