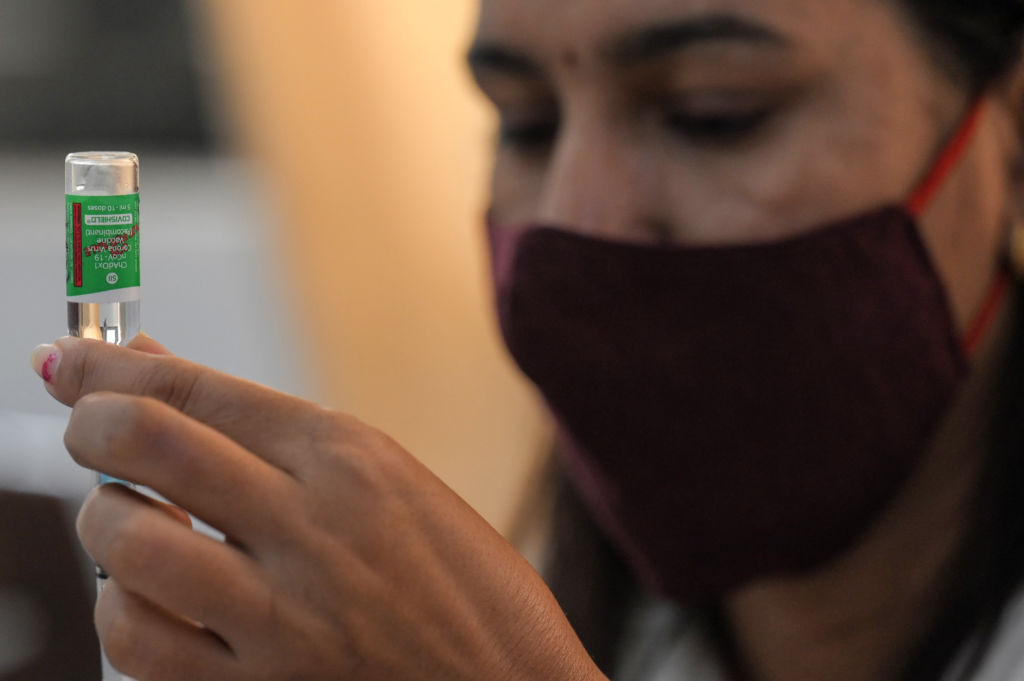 A health worker prepares a dose of the Covishield Covid-19 coronavirus vaccine at a temporary health centre in New Delhi on September 22, 2021. (Photo by MONEY SHARMA/AFP via Getty Images)

The move comes a day after the Indian government warned of “reciprocal measures” over “discriminatory” action against a UK-licensed product.

There was widespread condemnation of the Serum Institute of India-manufactured vaccines not being included in a list of eligible Covid-19 jabs recognised under Britain’s reviewed international travel norms, effective from October 4.

The updated advisory means that Indians fully vaccinated with Covishield will no longer be required to undergo compulsory 10-day self-isolation at home or declared locations on entry to England.

“Formulations of the 4 listed vaccines, such as AstraZeneca Covishield, AstraZeneca Vaxzevria and Moderna Takeda, qualify as approved vaccines,” reads the advisory from the UK’s Department for Transport and Department of Health and Social Care (DHSC).

“You must have had a complete course of an approved vaccine at least 14 days before you arrive in England,” it adds.

The move will also mean that a pre-departure PCR test is no longer required as long as vaccinated travellers pre-book a day-two test post-arrival in England and complete the compulsory passenger locator form in advance.

From October 4, England’s current traffic light system of red, amber and green countries based on levels of Covid-19 risk will be scrapped and replaced with one red list.

However, until this latest update, Indians vaccinated with any vaccines in India – including Covishield – were not recognised as vaccinated under the UK’s eligibility criteria.

“We have to see how it goes. But if we do not get satisfaction, we would be within our rights to impose reciprocal measures,” foreign secretary Harsh Vardhan Shringla said on the issue on Tuesday (21) in New Delhi.

“The basic issue is that here is a vaccine, Covishield, which is a licensed product of the UK company, manufactured in India of which we have supplied five million doses to the UK at the request of the government of the UK. We understand that this is being used under the national health system, and, therefore, non-recognition of Covishield is a discriminatory policy and does impact those of our citizens travelling to the UK,” he said.

The National Indian Students and Alumni Union (NISAU) UK, whose patron and Congress party MP Shashi Tharoor cancelled his planned UK visit in retaliation to the “offensive” rules, was among the many organisations in the UK rallying against the policy that would impact thousands of Indian students.

“Delighted that Covishield has now been recognised by the UK government and that all the lobbying has worked,” said NISAU chair Sanam Arora.

From October 4, travellers from 17 additional countries with eligible vaccines, including Australia, Japan, Singapore and Malaysia, will fall under the UK’s list of recognised jabs of Oxford/AstraZeneca, Pfizer BioNTech, Moderna or Janssen vaccines. The DHSC has said this list is reviewed fortnightly.

Under the new rules from October 4, unvaccinated Indian travellers or those not vaccinated with Covishield must take a Covid test three days before departure and book in advance for two Covid tests to be taken upon arrival in England.