Vande Bharat Express, the train that PM Modi launched in Gujarat, can run even in 2-feet water 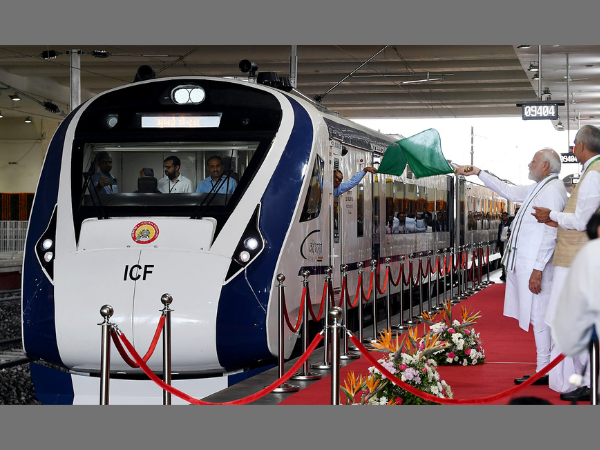 Indian prime minister Narendra Modi on Friday (30) flagged off a high-speed train called Vande Bharat Express in his home state of Gujarat where he went for a two-day visit starting Thursday (29).

The train will run between Gandhinagar, the capital of Gujarat, and Mumbai, the capital of the neighbouring state of Maharashtra and also known as India’s financial capital.

The train which the prime minister inaugurated has 16 coaches and can carry 1,128 passengers. Its weight has been brought down by 38 tonnes from the earlier version of 392 tonnes, which gives the passengers a more comfortable ride. According to Modi, the comfort might even be more comfortable than flying.

Officials said that the train can operate even in two feet of water which makes it competent even to run if facing flood conditions. The train can run at a top speed of 160 kilometres per hour or 99 miles per hour, news agency Reuters reported.

The Indian government has plans to launch 75 Vande Bharat Express trains by August next year to link all major industrial and business cities of the nation.

A spokesperson for Integrated Coach Factory, Chennai in Tamil Nadu, which manufactured the train, told Reuters it was fully designed at home with 80 per cent local materials, and would cost about $135 million (£121.1 million).

He added that the state-run factory has a goal of producing at least 27 trains by March 2023, besides high-speed freight trains soon.