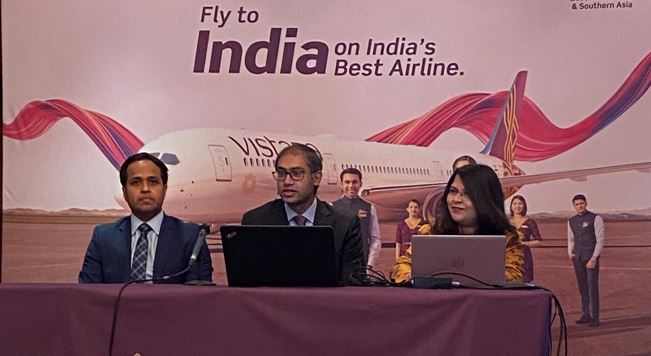 INDIA’s Vistara has started daily direct flights from London to New Delhi as part of its plans to focus more on Europe, the company said.

The airline celebrated the flight from London Heathrow Airport to New Delhi on Tuesday (17).

Vistara, a joint venture of ​​Tata Group and Singapore Airlines, said that more flights connecting Paris, Frankfurt, and London to Indian cities will be launched when more aircraft and slots become available.

“Internationally, we cover a total of 10 cities, including London. We are very happy with the route of the Vistara, the load factors are very strong. The average load factor is 80 to 85 per cent and the front-end cabin is well subscribed. Europe will definitely be the focal point if we have the aircraft available. The US is an area we look forward to,” said Vinod Kannan, CEO, Vistara, during a press conference.

Kannan revealed that the airline needs six Boeing Dreamliner aircraft but is currently serving with only two aircraft.

Kannan added: “Like other airlines over the last two years, our plans have changed with different needs following day-to-day changes. Finally, we are here today. What is important is to look ahead and things are looking bright. We are proud of what we have done. We look forward to seeing what happens in the future with our product offer.

“Fares will be temporarily high on most long-distance routes due to the Russia-Ukraine crisis, fuel prices, and strong demand against limited capacity. We are confident about the potential of the area due to the benefits like comprehensive connectivity with all major cities of India, touchless technology, and benefits like Starbucks on board, which we are the only airline serving. We are an Indian brand, bringing warmth and hospitality to which India is known.”

The airline has a hub-and-spoke model and codeshare with several leading airlines, including British Airways.

Vistara flies 78 flights between 29 cities in India and 10 flights abroad, the company said.