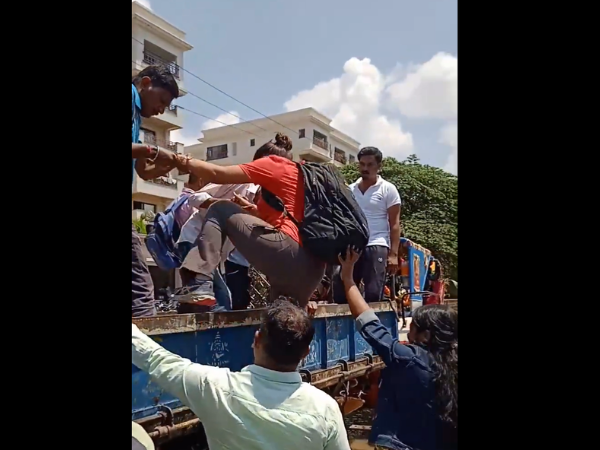 A woman IT worker being helped to get into a tractor to reach office through waterlogged streets in Bengaluru, India, on September 5, 2022. (Picture: Twitter screengrab @bhushan_vikram)

Bengaluru, the information technology (IT) capital of India, has been in news for wrong reasons this week. Following a heavy downpour on Sunday (4) evening, the city has come to a standstill with several areas lying under water and public services going out of order.

In this situation, the city remained witness to some bizarre pictures. Many IT professionals took rides in tractors to reach their workplaces as passenger vehicles found it impossible to ply on the roads.

In Yemlur near the city’s HAL airport, for example, many IT employees who reside near their offices had to ride tractors to reach their workplaces.

“We cannot take so many leaves from our office, our work is getting affected. We are waiting for tractors to drop us for Rs 50 (£0.54),” a woman employee of an IT firm told news agency Asian News International.

Thank you for a warm welcome #Bengaluru and @BBMPCOMM

I took an Uber 📱🚖 then a Tractor 🚜 and then a dirt motorcycle to reach office.

Sharing some amazing experience with you all pic.twitter.com/9JHkmo33a7

Basavaraj Bommai, the chief minister of the southern state of Kerala of which Bengaluru is the capital, assured the IT companies meanwhile that he would discuss with them problems they are facing because of waterlogging in the city. Bengaluru’s IT industry incurred an estimated loss of Rs 225 crore (£24.3 million) last week when the city was hit by heavy rain which left several IT workers stranded on the roads for at least five hours.

“We will call the IT companies and speak with them related to the issues that they are facing due to waterlogging. We will also discuss the compensation and other related damages that have been caused due to rain,” Bommai told ANI. The chief minister’s remarks came after the IT companies urged him to resolve the water-logging problem around the Outer Ring Road, a major road in the city which connects several IT firms.

On Monday (5), a 23-year-old woman was electrocuted after she fell on a severely waterlogged street and came into contact with an electricity pole. The incident also sparked anger among the local people who blamed the city’s civic and electricity authorities for her death.