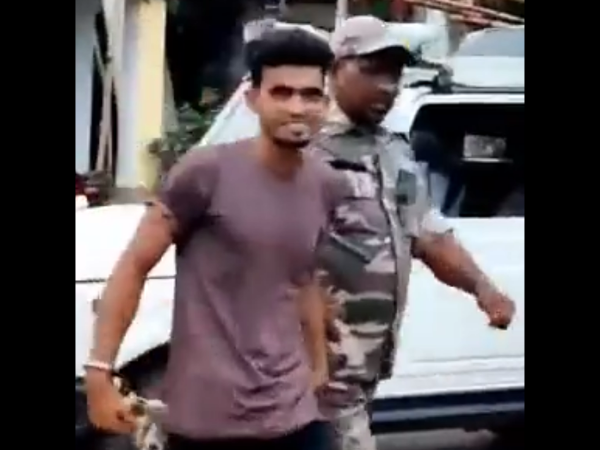 Shahrukh, accused of setting a teenage woman on fire and killing her in the eastern Indian state of Jharkhand, could be seen smiling in police custody. (Picture: Twitter screengrab)

Social media users in India were left shocked on Monday (29) after the youth accused of burning a teenage woman to death for turning down his proposal was seen smiling even as he was handcuffed.

The victim, named Ankita Singh, succumbed to her injuries on Sunday (28). The ghastly incident occurred in the town of Dumka in the eastern Indian state of Jharkhand on August 23. The accused poured petrol on the woman from outside her room’s window while she was asleep and set her ablaze.

The accused, named Shahrukh, could be seen smiling nonchalantly as he was being escorted by a policeman towards a police vehicle.

See the shameless #Smile of Shahrukh. He has no regrets after burning a Hindu girl to [email protected], even after being arrested. #JusticeForAnkita pic.twitter.com/LQ1rJAMOy9

The local administration, meanwhile, imposed Section 144 of the Code of Criminal Procedure which bars gathering of four or more people in the concerned locality to ensure that law and order was not disrupted after widespread protests demanding justice for the dead woman started.

The victim, a student of Standard 12, was admitted to a hospital in Dumka with 90 per cent burns. Later she was referred to a hospital in state capital Ranchi for better treatment but she could not be saved. Before succumbing to injuries, Ankita told the police that the accused called her on her mobile around 10 days ago and asked her to become his friend.

“He called me again around 8 pm on Monday and told me that he would kill me if I did not talk to him. I informed my father about the threat, after which he assured me that he would talk to the man’s family on Tuesday. After having our dinner, we went to sleep. I was sleeping in another room,” she said.

On Monday (29), the father of the ill-fated woman slammed the Jharkhand government saying his daughter would have been alive had the state’s chief minister, Hemant Soren, announced the compensation of Rs 10 lakh (£10,679) earlier.

Soren, who is facing a political battle for survival at the moment, announced the ex-gratia amount to the next of the kin of the victim on Monday.

“My daughter would have been alive had the compensation been given earlier by the CM. We could have taken her for better treatment,” Sanjeev Singh, the girl’s father was quoted as saying by India Today.

Shahrukh is currently in police custody.

Here are some of the reactions that the incident got:

#Jharkhand:- No remorse, No regret; Shahrukh Hussain, killer of Hindu minor girl #Ankita, seen laughing in the police custody. Protests by Hindu groups in #Dumka, demanding hanging of Shahrukh Hussain. He know well that he is in a state where mslim appeasement is priority of govt pic.twitter.com/I18vL9yaK2

Shahrukh, arrested on 23Aug, who set ablaze Dumka’s 16yo minor for turning down his “proposal”. After 5 days, girl died a painful death.

No remorse. No pain. No regrets. No worry for future. For parents. For family.

Very troubling visual. This is Shahrukh Hussain and he seems to be smiling after setting ablaze Ankita. No remorse, No regret. Incident is of Dumka, Jharkhand. #JusticeForAnkita https://t.co/7y48H2xmJ1

A 12th class girl Ankita from Dumka District, jharkhand was set on fire to death By Sharukh for not being relationship with him.
Look at her smiling face he has no regret for what he did. #lovejihaad#JusticeForAnkita pic.twitter.com/GRuFz40aVe