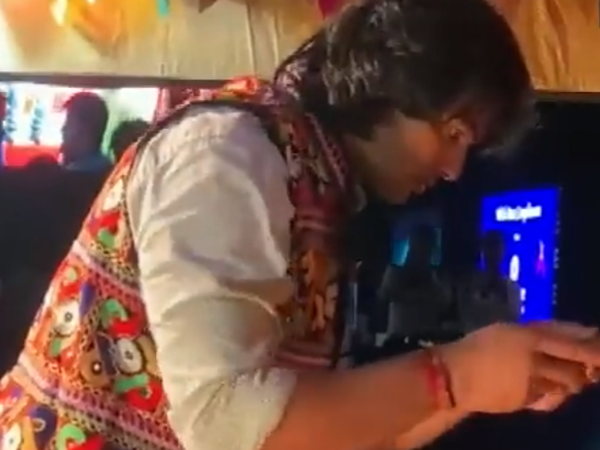 India’s Olympic gold-winner javelin thrower Neeraj Chopra was on Wednesday (28) seen in a new avatar as he took part in a Garba celebration during the ongoing Navratri festival in Vadodara in the western Indian state of Gujarat.

The 24-year-old athlete, who has backed up his historic medal at the Tokyo Games last year with a number of other prestigious titles, arrived in the city for the 36th National Games’ opening ceremony. He then took part in Navratri and did Garba, a dance form from Gujarat which is performed during the nine-day Navratri festival.

Chopra, who wore a traditional jacket, offered puja before going to the Garba ground. He danced with many other people who were elated to find in their company one of India’s most successful athletes.

The sportsperson interacted with people and as the audience chanted his name, he greeted them on Navratri and said it was a pleasure for him to join them.

The Sports Authority of India (SAI), which is the country’s apex national sports body, posted an exclusive video showing Chopra interacting with people and captioned it, “Olympic Gold Medalist and World Champion, Neeraj Chopra, joins in to enjoy Garba in Vadodara, which is part of the Navratra celebrations in Gujarat, during his visit for the 36th National Games.”

Olympic Gold 🥇Medalist and World Champion @Neeraj_chopra1 🇮🇳 joins in to enjoy garba in #Vadodara, which is part of the Navratra celebrations in Gujarat, during his visit for the #36thNationalGames pic.twitter.com/Zj0UDpbw3l

Users reacted to the video with one calling Chopra “Such a Gem n Down to Earth”.

Feel Proud, such a Gem n Down to Earth….🙏

Chopra has had a wonderful 2022 when he won silver at the World Athletics Championship in the US and the Diamond League title in Zurich, Switzerland. The only setback for him during the year was the injury that he sustained at the World Championships that barred him from competing at the Commonwealth Games in Birmingham in July-August.