WATCH: PM Modi carries mother Heeraben’s mortal remains after she passes away at 99 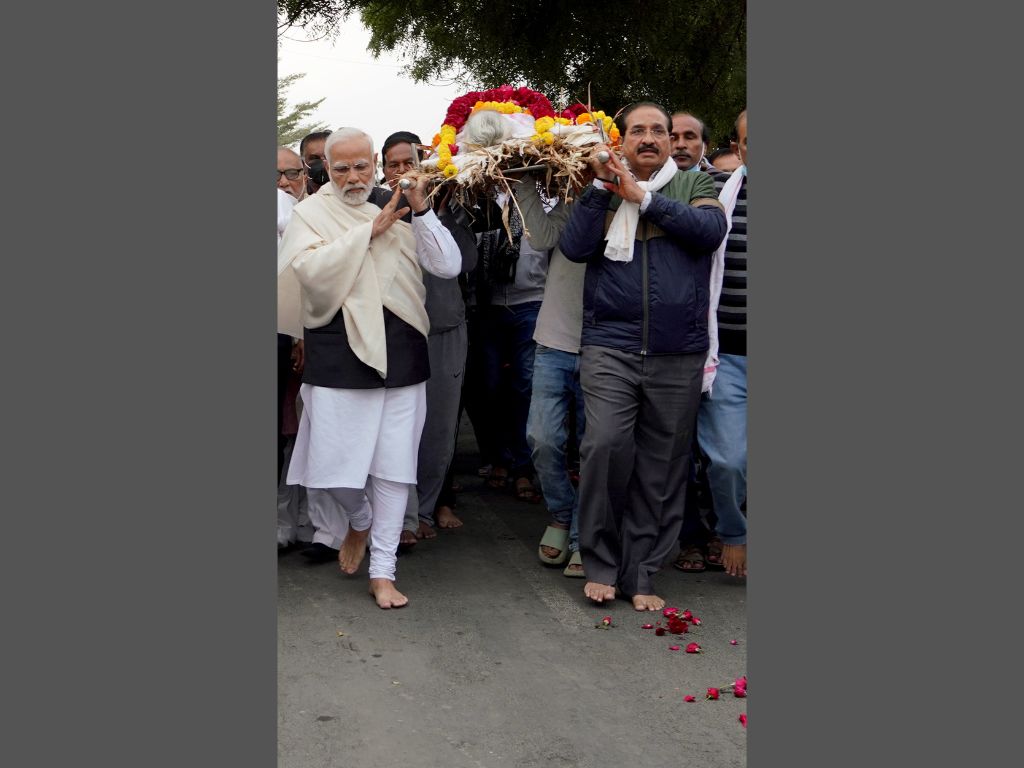 Indian prime minister Narendra Modi along with his family members carry the mortal remains of his mother Heeraben Modi for the last rites, at a crematorium, in Gandhinagar in India’s Gujarat on Friday, December 30, 2022. (ANI Photo)

Indian prime minister Narendra Modi on Friday (30) bid adieu to his mother Heeraben Modi who passed away at a hospital in Ahmedabad in the western state of Gujarat earlier in the day at the age of 99.

PM Modi, who arrived at the Gujarat city after her death and went to her residence in Gandhinagar to pay his final tributes, was seen carrying his mother’s mortal remains barefooted to the crematorium where he performed her last rites.

#WATCH | Gandhinagar: Prime Minister Narendra Modi carries the mortal remains of his late mother Heeraben Modi who passed away at the age of 100, today. pic.twitter.com/CWcHm2C6xQ

Heeraben was admitted to the hospital earlier this week after her health deteriorated.

Modi informed about his mother’s death early on Friday on social media where he posted a heartfelt message in Hindi, saying, “A glorious century rests at the feet of God… In Maa, I have always felt that trinity, which contains the journey of an ascetic, the symbol of a selfless Karmayogi and a life committed to values.”

He also recalled his meeting with his mother on her 100th birthday earlier this year where she told him to work with intelligence and live life with purity.

A medical bulletin from the UN Mehta Institute of Cardiology and Research Centre, where Heeraben was admitted, also announced the news of her demise.

Tributes poured in from across the country as soon as the news broke. Politicians and celebrities took to social media to pay their condolences to the prime minister and his family.