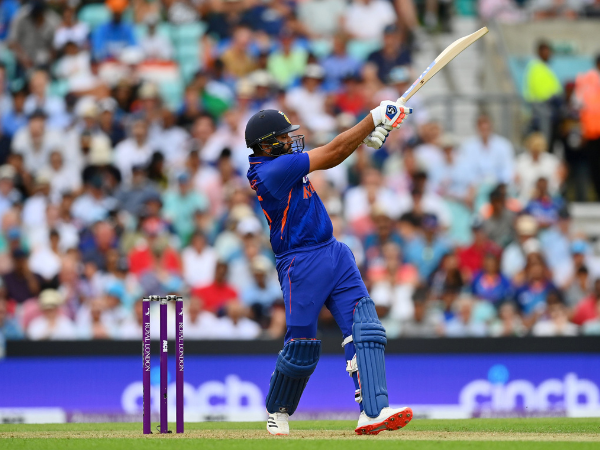 India captain Rohit Sharma plays a shot during the 1st ODI against England at the Kennington Oval in London on Tuesday, Junly 12, 2022. (ANI Photo/BCCI Twitter)

CRICKET over the years has become a game of muscular batters and it has put spectators in the gallery in danger. On Tuesday (12), India captain Rohit Sharma was on the rampage as he slammed 76 not out in only 58 balls to make the first one-day international against England at the Oval look like a cakewalk. Sharma, who is called ‘hitman’ for his powerful hitting, blasted five sixes during his knock and one of those landed on a little female cricket fan who is only six years of age.

Play was briefly halted after the incident happened during the fifth over of the Indian chase of 111 after the hosts were bundled out by some fiery pace bowling by the Indians. The delivery from England seamer David Willey connected the sweet spot of Sharma’s bat after he pulled it with a great timing and flew towards the crowd in the fine leg. Immediately after the on-field umpire signalled the maximum, the camera focused on that area and a man was seen consoling a girl and rubbing her back, probably because of the ball hitting her.

The physios of the England team also rushed to check the girl named Meera and found that it was not too serious.

Shoutout to the @englandcricket physios yesterday 🙌

6 year-old Meera was hit by a Rohit Sharma six in the crowd and they quickly rushed round to check on her.

She was okay and even received a visit off Sharma himself later in the day!#ENGvIND pic.twitter.com/mbvOsoT6lQ

Commentators Ravi Shastri and Michael Atherton said the ball had indeed struck someone in the crowd.

“It seems someone in the crowd may have gotten hit by this six from Rohit Sharma. Fingers crossed… nobody is hurt,” said Atherton. To it, Shastri said: “Yes, looks that way. The way Rohit is looking towards that area, he might have got the message it’s probably hit someone”.

The cricketers also wanted to ensure that everything was fine before the game resumed. Sharma later visited the girl and checked on her well-being.

This was not the first time that Sharma had hit a spectator with one of his stupendous sixes. During the 2019 World Cup in England, too, one of his shots had hit an Indian supporter in the stands during a game between India and Bangladesh. Sharma later met the ‘victim’, a young Indian girl named Meena and presented her a hat autographed by himself.

What an gesture by #TeamIndia! During yesterday’s game #INDvBAN a spectator called Meena was hit by a ball when @ImRo45 hit a six..but the smiling surprised came to her post match when she was presented with an autographed hat by none other than #RohitSharma himself !! 👏🙏🎁🇮🇳💐 pic.twitter.com/oGGK3wv5t0