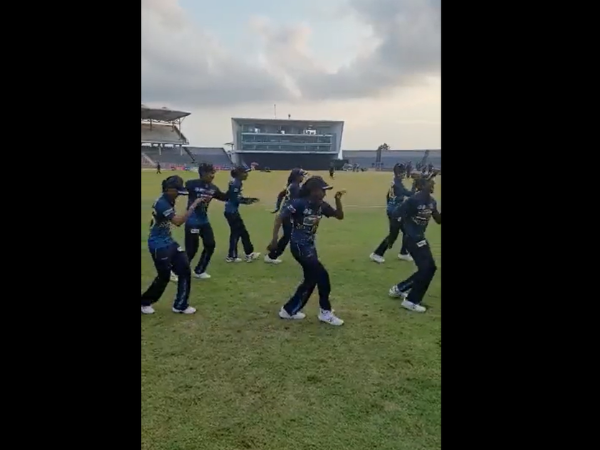 Sri Lanka women cricketers dance to celebrate their 1-run win over Pakistan in the semifinal of the Asia Cup tournament in Sylhet, Bangladesh, on Thursday, October 13, 2022. (Picture: Twitter/@OfficialSLC)

After the men, it is the women.

The Sri Lanka women’s cricket team made their country proud like their male counterparts by reaching the final of the ongoing Asia Cup tournament by defeating Pakistan by just one run in the second semi-final at the Sylhet International Cricket Stadium in Bangladesh on Thursday (13). However, more than their show during the game, the islanders stole the show with their coordinated dance celebrations after the game. Sri Lanka Cricket, the country’s cricket board, shared a video of the celebrations on social media.

They will meet India, who hammered Thailand by 74 runs in the other semi-final earlier in the day, in the title clash at the same venue on Saturday (15).

Sri Lanka qualified for the finals of the Women’s #AsiaCup2022 after winning against Pakistan by 1 run. pic.twitter.com/WXHkGcQJdd

The Sri Lankans, who lost to Pakistan in the final league match on Tuesday (11), put up an ordinary batting display after winning the toss and electing to bat. Chamari Athapaththu’s team could manage only 122 runs in 20 overs for the loss of six wickets, thanks to some spirited bowling from Pakistan.

Pakistan started off well with their chase with their openers Muneeba Ali (18) and Sidra Ameen (9) putting up 31 runs in 3.1 overs but after Ali was run out, the chasing team gradually started losing the plot. Captain Bismah Maroof top scored with 42 runs but consumed 41 balls and Nida Dar, who made 26 at a run a ball, was the last Pakistan batter to get dismissed and it happened in the final delivery when she was run out. The women in green needed nine runs off the final over but ended just one run short of a tie and while it left them and their supporters shell-shocked, Sri Lankans were celebrating.

Slow left-arm spinner Inoka Rawanweera was the pick of the Sri Lanka bowlers with two wickets for 17 runs in four overs. She was chosen as the player of the match.

This is the fifth time that Sri Lanka have made the final of the women’s Asia Cup and on all four occasions before this, they were beaten by India.

Recently, the Sri Lanka men’s team defeated Pakistan in the final of the Asia Cup in the UAE.