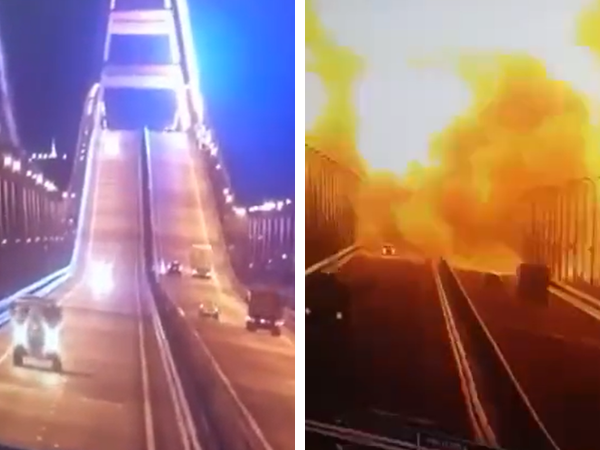 (L) Moments before the Kerch Bridge connecting Crimea to Russia exploded on October 8, 2022; (R) the bridge after the explosion (Picture: Twitter screengrab/@christogrozev)

A key bridge that connects the Crimean Peninsula with mainland Russia was gutted in a fire sparked by a car bomb, authorities in Moscow said on Saturday (8).

Russia’s RIA state news agency said that a fuel tank was on fire on the Kerch Bridge, while Ukraine media reported an explosion. Visuals from the bridge showed some carriages of a train on the Kerch bridge in Crimea being engulfed in a fire.

Traffic has been suspended on the road-and-rail bridge.

“An object believed to be a fuel storage tank has caught fire on the Crimean Bridge, but the viaduct’s navigable arches sustained no damage, an aide to the head of Crimea, Oleg Kryuchkov, said as cited by the Russian news agency TASS.

Meanwhile, the National Anti-Terrorism Committee of Russia said on Saturday that the bridge connecting Crimean Peninsula with mainland Russia was damaged in a blast, which occurred shortly after 6 am local time, caused a partial collapse of the road on the vehicle section. It also triggered a blaze on a freight train on the parallel rail section, with seven fuel tanks catching fire, according to RT.

A ferry service across the Kerch Strait was set to be launched later on Saturday, according to Crimea’s Head Sergey Aksyonov, TASS reported.

The bridge was opened in 2018 by Russian president Vladimir Putin, four years after Moscow annexed Crimea and was designed to link the peninsula to Russia’s transport network.

The 19-kilometre (11.8 miles) bridge, which runs across the Kerch Strait and connects Crimea with mainland Russia, consists of a railway and vehicle sections. It became fully operational in 2020.

As per some media reports, the Crimean bridge is a key target for Ukrainian forces who have been attacking Russian logistics.
Notably, Russia recently annexed four regions of Ukraine – Donetsk, Luhansk, Zaporizhzhia and Kherson regions.

The war between Russia and Ukraine appears to be entering a new phase after Kyiv dealt a big blow to Moscow’s grip after it recaptured 2,400 square kilometres of territory in the Kherson region in the south of the country “since the beginning of the full-scale war,” a senior Ukrainian official said Friday, reported CNN.

Kyrylo Tymoshenko, deputy head of the president’s office said six settlements had been liberated in the Kherson district as well as 61 in the Beryslav district.

Tymoshenko said the evacuation of civilians continued amid massive destruction to critical infrastructure in towns like Arkhanhelske, Vysokopillia and Osokorivka, all of which saw weeks of heavy fighting and indirect fire. Demining is in progress, he added.

Ukrainian forces have been making steady progress in Kherson since beginning an offensive at the end of last month, and their successes have sparked rare criticism of Moscow’s war effort among pro-Russian figures.

“The Ukrainian army is making a rather fast and powerful advance in the south of our country in the course of the ongoing defensive operation,” Zelenskyy said in his evening address.

“Our warriors do not stop. And it is only a matter of time before we will expel the occupier from all our land.”