WATCH: This Kerala man drives a beautified government bus, his wife is its conductor 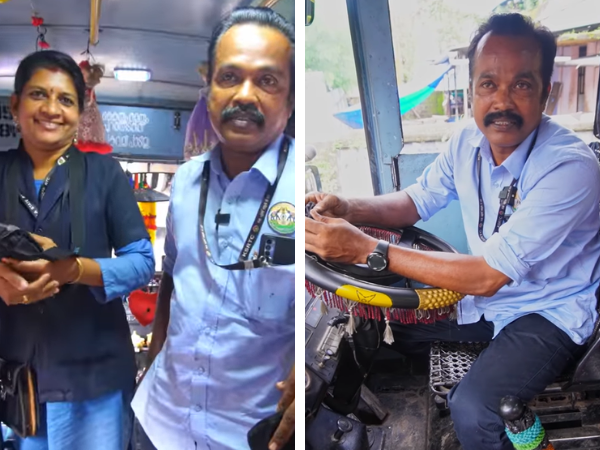 STORIES of couples succeeding with commendable team work are not rare but a duo from the southern Indian state of Kerala have perhaps beaten them all.

Giri Gopinath and Thara have recently stolen all the limelight on social media for the reason that they operate a government bus in Alappuzha district of the state, almost like a well-nurtured family business. While the husband, Giri, drives the Kerala State Road Transport Corporation vehicle, Thara, the wife, looks after collecting the tickets.

And guess what? the couple have also invested their own money for decorating the bus with various fancy items and also upgrading it with extra fittings such as LED lights, a music system, CCTV cameras — things that are not commonly seen in government buses in India.

Local people are fond of the buses that Giri and Thara run and for many, their vehicle has become a star attraction. People not only feel curious to know about the story of the couple but also take pictures and videos, one of which went viral on social media, making the duo famous overnight.

The couple have not only put up six CCTV cameras inside the bus to ensure passengers’ safety but also installed emergency switches. They have also installed a good-quality music system, mechanised air freshners and even dolls to keep kids travelling in the bus engaged.

Days start far too early for the working couple who share their ‘mobile work space’. In a video shared on Facebook by Iype Vallikadan, Thara said they get up at 1.15 am every day and reach the bus depot by 2 am. There, Giri cleans the vehicle and their duty begins at 5.50 am.

Some stories are too inspiring to overlook, isn’t it?