WATCH WITH HORROR: The moment when a crowded bridge in Gujarat collapsed 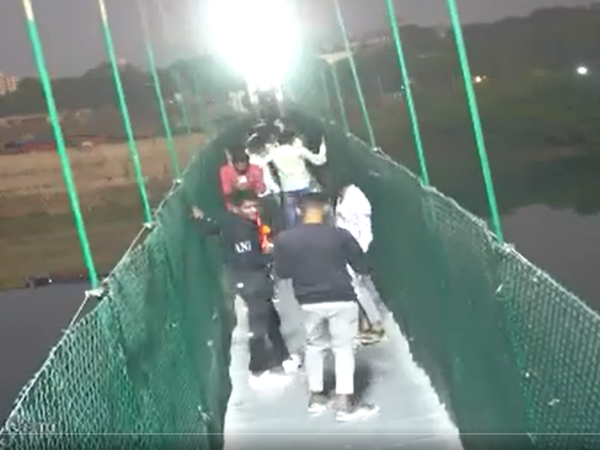 Moments before a pedestrian bridge in Morbi in the western Indian state of Gujarat collapsed on October 30, 2022, killing more than 130. (Picture: Twitter screengrab/@sardesairajdeep)

A century-old suspension bridge over Machchhu river in Morbi in the western Indian state of Gujarat collapsed on Sunday (30) evening, resulting in deaths of more than 130 people and injuries to more than 100.

CCTV footage showed revellers on the bridge were shaking it when it came crashing down, throwing the people into the water beneath.

Here is the authentic CCTV footage of the Morbi bridge collapse: NOT the old videos that are being made viral to blame the public. Yes, bridge is crowded but to blame crowds would be to shun responsibility for multiple level failures of those involved in ensuring safety. pic.twitter.com/6wVA0xddXl

In a video which was doing rounds on social media, people were seen holding on to the bridge and trying to swing it with its cables. The crowded bridge swung before caving in, resulting in a major tragedy.

It was only a few days ago that the British-era bridge was reopened for the public after completion of renovation work that lasted seven months.

The rescue operations continued through the night.

Modi announced an ex-gratia of Rs 2 lakh (£2,092) from the Prime Minister’s National Relief Fund for the next of kin of each of the deceased and Rs 50,000 to each of the injured.

Indian prime minister Narendra Modi, who is currently in Gujarat, also expressed condolences over the tragedy and was set to visit the site on Tuesday (1).