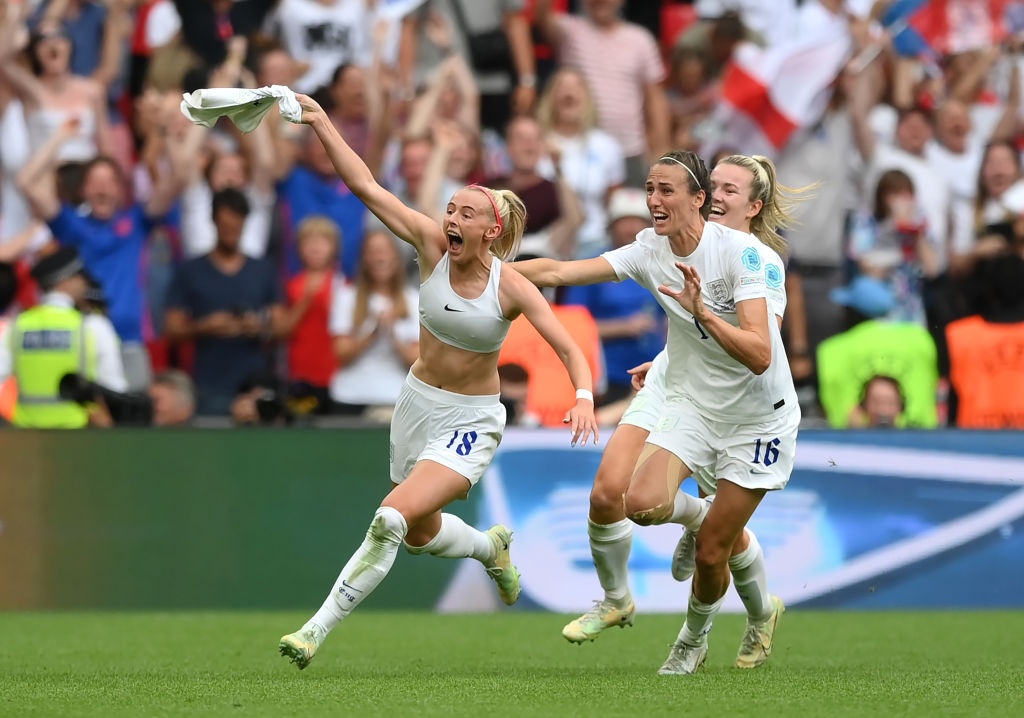 Chloe Kelly of England celebrates with team mates after scoring their side’s second goal in extra time during the UEFA Women’s Euro 2022 final match between England and Germany at Wembley Stadium on July 31, 2022 in London, England. (Photo by Shaun Botterill/Getty Images)

She made history on July 31 not only by scoring the winning goal for her country against continental foes Germany in the final of the Euro in the extra minutes, but also for putting up a special celebration post the scoring.

Chloe Kelly ran with the England shirt whirling over her head, sporting her sports bra — an image that many thought was historic and spoke a million words about an emphatic feminist statement about a game that men have dominated for years.

Almost a week since the heroics at the Wembley Stadium, Kelly admitted that she had been amazed by how iconic and empowering her celebration has turned out to be. She, however, said that it was not a calculated gesture about women empowerment but just a spontaneous one.

Speaking to the Daily Mail, Kelly said: “It was a spontaneous gesture. I wasn’t thinking about [making a statement about] women’s empowerment. I was just celebrating the moment.

“I didn’t realise how big taking my top off would become and what it would do for women.”

She also said that the booking she received for the celebration was the “best yellow card I’ve ever received.”

Kelly told the media after the historic final that she was planning on framing her sports bra, and confirmed that it was still the case.

“I have to frame the iconic bra, don’t I,” she said. “I think it’s the way that moment has empowered women that’s made it so iconic, but also we’d just won the Euros.”

Along with the goal and celebration, Kelly was part of another unusual moment when she abruptly ended an on-pitch interview to rush to join her colleagues’ celebrations.