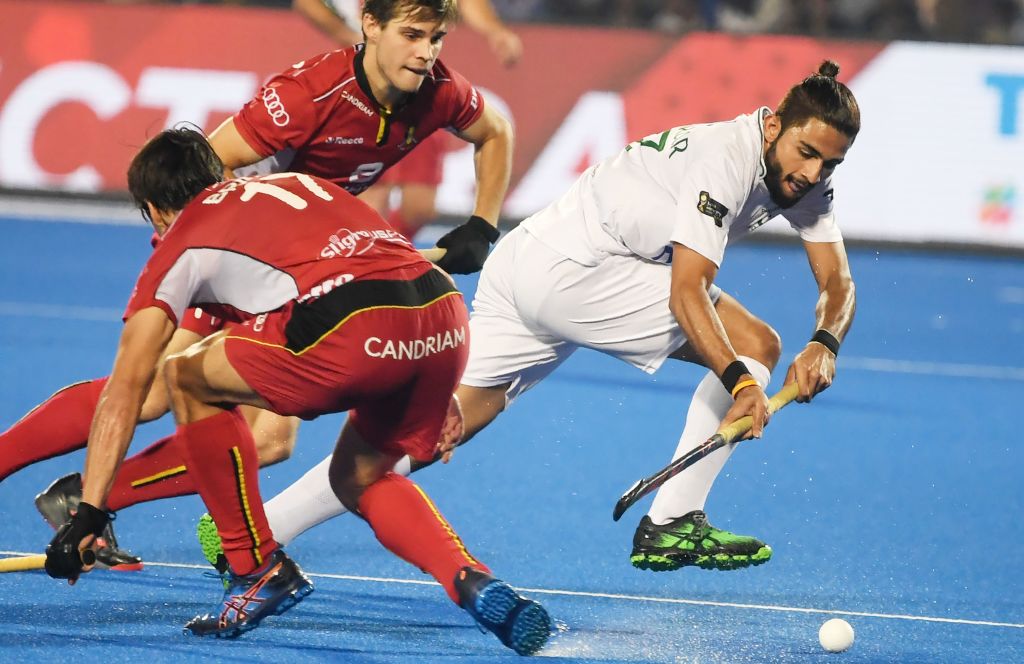 Pakistan’s Abu Mahmood (R) fights for the ball with Belgium’s Thomas Briels (L) during the field hockey cross-over match between Belgium and Pakistan at the 2018 Hockey World Cup in Bhubaneswar on December 11, 2018. (Photo by DIBYANGSHU SARKAR/AFP via Getty Images)

The 15th edition of the men’s hockey world cup kicked off in Odisha (for the second consecutive time) in India but Pakistan, the most successful team to have played in the marquee competition with four titles, are missing.

Is there a political reason why Pakistan are not playing in hockey’s biggest tournament in India?

It may be mentioned here that the men in green had appeared in the 2018 edition of the tournament which was also played in India and it is not the politico-diplomatic tension between the two south Asian neighbours that have stopped Pakistan from participating in the competition.

The reason is completely sporting.

Pakistan had won six medals — four champions (even one edition in India) and two runners-up — at the hockey world cup between 1971 when it started and 1994 but thereafter, they have not managed to win a single medal, which shows to what extent hockey’s stature has slumped in that country.

In the Olympics, too, Pakistan won the gold medal in hockey three times but haven’t won any after 1984, the last time they won the gold.

Pakistan failed to qualify for the hockey World Cup for the first time in 2014 when the tournament was held in The Hague, Netherlands. They qualified for the next one in India but again failed to make it to the 2023 edition.

The Asian powerhouse had the opportunity to qualify during the Asia Cup held last year in Dhaka, Bangladesh, where they were clubbed with arch-rivals India, Japan, and Indonesia. They drew India 1-1 and hammered Indonesia 13-0 but a 2-3 loss to Japan dashed their hopes as they failed to make the semifinals.

As per the international hockey federation’s rules, only the top four teams from Asia will qualify for the world cup. Japan, South Korea, and Malaysia were the three teams that qualified while India had already qualified as they are the hosts.

In the 2018 edition, Pakistan lost 0-1 to Germany and 1-5 to the Dutch and drew 1-1 with Malaysia. But their run was terminated with a humiliating 0-5 defeat to Belgium, the eventual champions, in the second round.