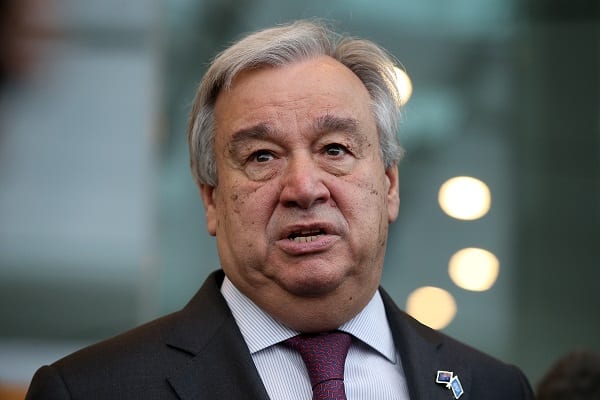 MEN must stop excluding women from peace talks around the world, UN chief Antonio Guterres said Wednesday (15), warning that in conflicts such as Russia’s invasion of Ukraine the situation is actually “going backwards.”

The UN secretary-general said the lack of female representation in such negotiations from Ukraine to Afghanistan, Myanmar and Mali shows “how enduring power imbalances and patriarchy are continuing to fail us.”

It results in “men in power and women excluded, their rights and freedoms deliberately targeted,” he told a special meeting of the Security Council.

But women’s “right to equal participation at all levels, is essential for building and maintaining peace,” said Guterres.

He noted that Russia’s invasion of Ukraine has forced millions of women and children to the flee the country, “putting them at high risk of trafficking and exploitation of all kinds.”

“Women who chose not to evacuate are at the forefront of healthcare and social support,” said Guterres.

Their perspectives are therefore “critical to understanding conflict dynamics,” and make their participation “essential for resolving conflicts.”

In many areas, men in power have actively worked to exclude women, said Guterres, citing for example Afghanistan, where “nearly 20 million Afghan women and girls are being silenced and erased from sight.”

In Myanmar, “women cannot express themselves openly and have no route to political participation,” added the UN chief.

He was unequivocal about the impact of what he termed “the recent shift away from inclusive politics,” saying it “shows once again that misogyny and authoritarianism are mutually reinforcing.”