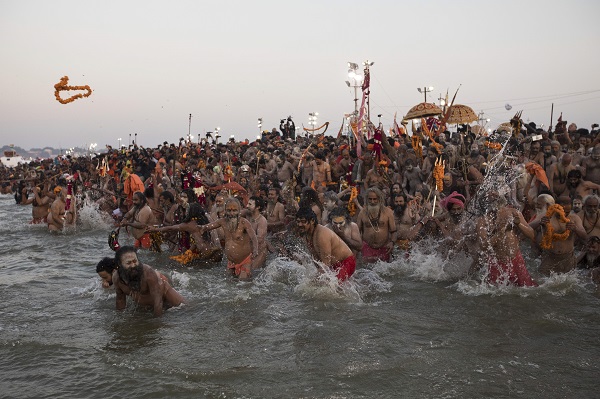 Armed with temporary identity cards and pamphlets, Singh and a group of volunteers have helped set up seven camps to keep track of children who travel with their families to attend the eight-week festival (Photo: XAVIER GALIANA/AFP/Getty Images).

Camps to protect children from human traffickers have been set up for the first time at the world’s biggest religious festival, the Kumbh Mela in northern India’s Uttar Pradesh state.

During the event, as many as 150 million people are expected to visit the festival city of Prayagraj to bathe at the confluence of the Ganges, the Yamuna, and a mythical third river, the Saraswati, from January 15 to March 31.

“In the melee, it is very easy for a child to just disappear,” said Subedar Singh, a campaigner with anti-trafficking charity Pragati Gramodyog Evam Samaj Kalyan Sansthan.

“Thousands of children, particularly girls between 12-15 years old, are left behind by their families to take care of the elderly, who spend up to a month here. These girls are always at risk,” he said on Tuesday (12).

Armed with temporary identity cards and pamphlets, Singh and a group of volunteers have helped set up seven camps to keep track of children who travel with their families to attend the eight-week festival.

Religious congregations are an integral part of Indian culture but are becoming dangerous places for children and thousands are reported missing each year, child rights campaigners say.

“We have consistently seen that during these events, there is a noticeable spike in the number of children reported missing,” said Smita Dharmamer of Aangan Trust, a charity that works on child protection across six Indian states.

“And while we say missing, the fact is that there are organised groups at work and the children are trafficked.”

Many families believe that because they are in a place of faith, that God will protect them, so often ignore safety checklists, anti-trafficking campaigners added.

Practices to protect children that were first developed by the Aangan Trust and used in two separate religious fairs in Bihar and Uttar Pradesh in 2018, have now become the template at the Kumbh Mela.

At the seven booths, housed near the temporary ashrams where pilgrims stay, a database of all children visiting the event will be maintained.

Each child will also be given a detailed identification card that includes the exact ashram where their family are staying.

The Kumbh Mela has always had lost and found booths to help reunite lost children and the elderly with their families.

But often children are unable to remember the name of the ashram where they are staying or their parent’s telephone number, said police officer Neeraj Pandey, who is in-charge of the security at the Kumbh Mela.

“Children are often confused when they are brought to the booths and we spend many days trying to locate their families,” said Pandey.

Parents at the event have often complained about adolescent girls who have gone missing, though no human trafficking cases have ever been filed to date, he added.

The police have also for the first time set up a fully computerised network to track children with 14 booths spread across the enormous venue.

“It seems like a small intervention, but the impact is big,” said Shitla Prasad Pandey, a fourth generation priest at the Kumbh Mela.

“So many sacred activities go on at this event but what can be more sacred than ensuring the safety of children.”