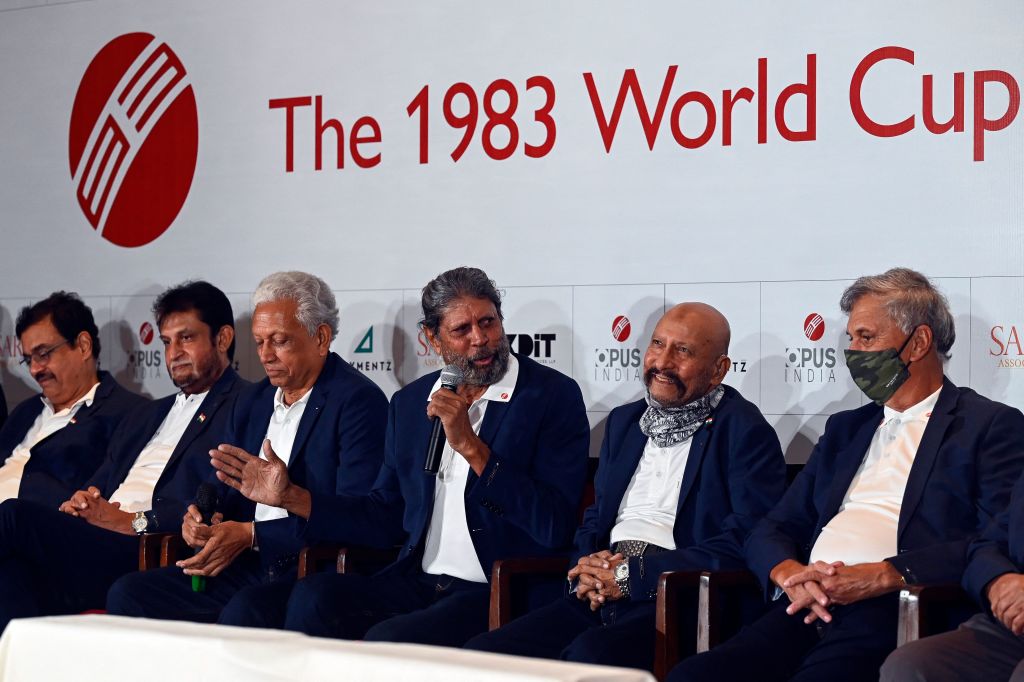 Kapil Dev (fourth from left), the captain of the 1983 World Cup-winning Indian cricket team along with his teammates at an event in Gurgaon, India, on June 25, 2021 – the 38th anniversary of India’s historic win. (Photo by PRAKASH SINGH/AFP via Getty Images)

FORMER India captain Kapil Dev could not hide his happiness over ‘83’, the upcoming cricket film on India’s maiden World Cup win in 1983 under his captaincy.

The 62-year-old, who is one of the greatest all-rounders the game has seen, lauded the makers of the film in which actor Ranveer Singh portrayed him and his real-life wife Deepika Padukone as Dev’s wife Romi.

He shared the trailer of the film which was released on Tuesday (30) on Instagram and wrote, “The story of my team.”

Singh also shared the trailer on Twitter, saying, “The incredible true story of the underdogs who pulled off the unthinkable!”

The incredible true story of the underdogs who pulled off the unthinkable!#83Trailer in Hindi Out Now: https://t.co/3p6pO6X78q

The film, which is directed by Kabir Khan, revolves around India’s winning the 1983 crown even though they had gone into the tournament as underdogs. Dev and his team, popularly called ‘Kapil’s Devils’, defeated defending champions West Indies, who were the dominant forces in the cricketing world then, by 43 runs in the final at the historic Lord’s on June 25 to ruin their chances of accomplishing a hat-trick of crowns.

The win changed the course of cricket in India and elevated its status to a national passion.

The film also features senior actor like Pankaj Tripathi who plays Man Singh, the manager of the Indian team in the 1983 tournament, besides Tahir Raj Bhasin, Jiiva, Saqib Saleem, Jatin Sarna, Chirag Patil, Dinker Sharma, Nishant Dahiya, Sahil Khattar, Ammy Virk, Addinath Kothare, Dhairya Karwa, R Badree and others. The former cricketers of the 1983 World Cup squad helped the actors of the film in acquiring the game’s skills to excel in the film.

One of the members of that World Cup-winning team, Yashpal Sharma, passed away earlier this year.

‘83’, which got delayed a number of times because of the coronavirus pandemic, will hit the theatres on December 24.