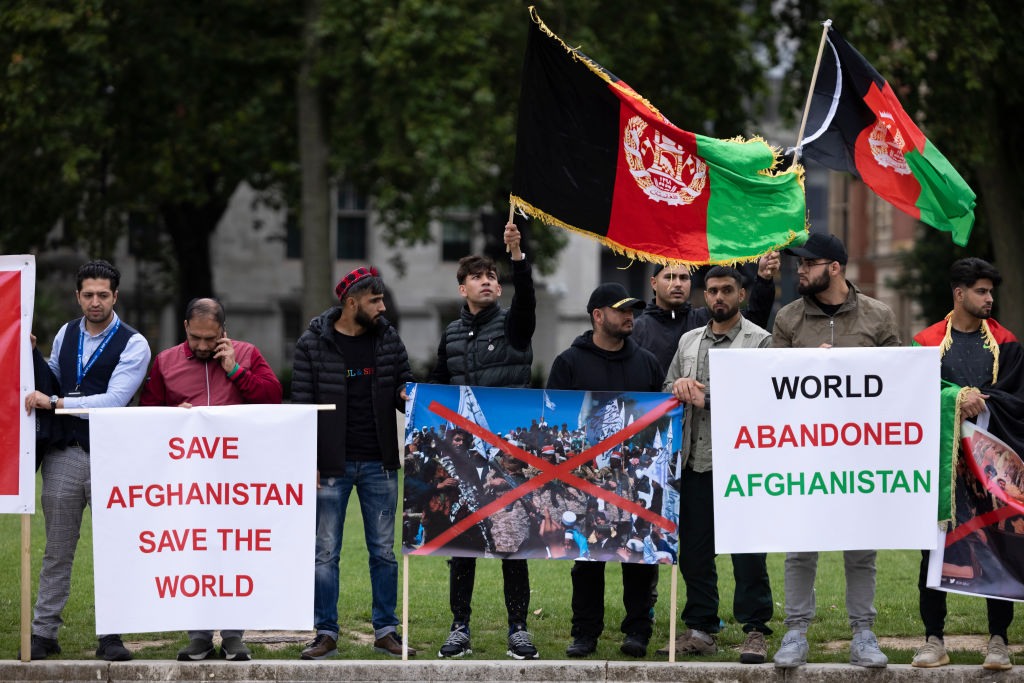 Protest against the Taliban takeover of Afghanistan in London, UK, on August 17, 2021. (Photo by Dan Kitwood/Getty Images)

THE world has found itself overwhelmingly shocked with the Taliban racing at a lightning speed to take control of Afghanistan, a country that was once under their rule till the US-led western forces invaded it in October 2001 to avenge the devastating terror attacks of 9/11.

While the American intelligence was stunned to see the extremists regaining their lost ground so fast, the world witnessed helplessly the exit of president Ashraf Ghani who was accused of thinking little about his own people at this hour of crisis. But Ghani had little option, one would say, since his forces had little chance of succeeding against the determined Taliban fighters. This outcome was just a matter of time.

There is no end to the debate that the US should not have pulled out of Afghanistan in the manner it did. For many, this was an irresponsible move. But president Joe Biden has defended it despite a harsh criticism asking “How many more American lives is it worth?”

The Democratic leader said there was never a good time to withdraw US forces and there is a tinge of truth in that statement. The Afghanistan quagmire kept as many as four presidencies of America engaged with no end in sight. After George W Bush had taken the US to a war in Afghanistan to nail Osama bin Laden, his successors Barack Obama and Donald Trump tried to put an end to America’s longest war abroad but they never could bell the cat despite the immense loss of money and manpower because the stakes were too high. But Biden eventually took the step and it was bound to see some serious repercussions.

If there was one big blunder over Afghanistan, it was the US’s decision to invade that country 20 years ago. By deciding to stay there, the US only allowed things to get complicated since the region is an extremely sensitive one for geo-politics and geo-security. Washington eventually gained nothing by staying back in Afghanistan since the local socio-political reality never changed. As it has been in Iraq, the West’s ploy of planting a democracy from above earned no positive result. Democracies can’t be exported and puppets can’t be expected to rule nations eternally. The US has seen this enough in history but yet it seems that it learns nothing.

In 20 years, the US-led forces could not prepare Afghanistan’s own security apparatus, leave alone a democratic overhauling. Corruption, lack of cohesion and smart thinking plagued the Afghanistan forces throughout and their fast collapse makes it abundantly clear. Ghani’s exit showed how disconnected the elite leadership was with the hapless masses of the nation who are now back at the mercy of the ruthless Taliban. What did the US’ war on terror eventually achieve in Afghanistan? A big zero.

Trump himself pulled troops out of Syria

America’s withdrawal from Afghanistan is not just a regional retreat but is vastly symbolic. It means in a way the end of the American era. Trump, who is now criticising Biden over the Afghanistan pull-out, had himself withdrawn troops from northern Syria in 2019 as he intended to end the US’ endless wars abroad. So, keeping the political showmanship aside, each of the American leaders know that these wars are not viable any more. Multilateralism is the system that the world has to prepare for while dealing with international crises next and for countries like India, it will be prudent to not bank on the world’s only superpower for gains at some of the world’s most challenging geo-strategic theatres.

What happened in Afghanistan today was always coming. The reality is that the Taliban are back in power and the world has to now deal with them.