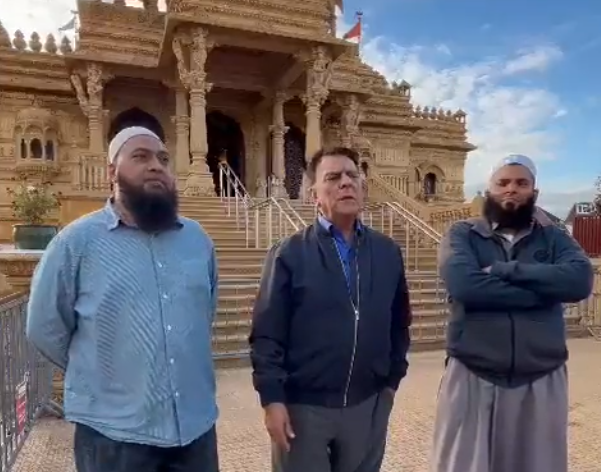 IDENTITY politics is infecting our communities in the UK.

Last week, some hate preacher decided it would be a good idea to try to organise a demonstration against a Hindu temple in my constituency.

I responded immediately, pointing out that their inflammatory post was incitement to religious hatred and was a crime that carried a jail sentence. I made it clear that any would-be protesters should back off and stay away.

The next nine hours were pretty intense – talking to the police borough commander to make sure the necessary security arrangements were in place to protect residents, worshippers and the temple; liaising with the council’s chief executive, meeting leaders of faith communities and Indian TV journalists, to make sure that any demonstrators had a wasted journey.

The key thing was to understand what it was that the hate-filled people behind the demonstration wanted. They wanted a fight, and my job was to make sure they didn’t get one.

Understandably, some in the Hindu community wanted to mount a counter demonstration to defend the temple. The police were very clear that this would play into the racists’ hands.

Leaders like Narendra Thakrar, chairman of the Sanatan Mandir, and Nirmala Patel, the president of Brent Hindu Council, were both too clever to rise to the bait and urged people to go to the mandir, to say prayers, do arti, but NOT engage with any demonstrators. The Indian community does not need to march and parade and wave flags against racists to be confident in its own identity.

Identity politics is being stirred up in a disgusting way on both sides of the divide. It does not matter if you call it a Hindu-Muslim divide, or an India-Pakistan one. There are people who believe they can establish their power base by telling young men (and it is usually young men), ‘the only way you can prove you are a good Hindu, a good Muslim or a good Sikh is by standing up and hating the other side’. And it’s not true. But that’s their power base. That’s why they do it. It’s vicious, it’s horrible, and it is corrupting our politics in the UK.

It’s really easy for the leaders of each of the communities to stand up and point a finger at people who are doing it on the other side. But it’s much more difficult to stand up and point the finger at the people on your own side who are doing it. That’s what’s important. Because true leaders don’t just say, ‘Yeah, I’ll lead you into the battle against them.’ True leaders say, ‘Look what you’re doing to our community, look how you’re corrupting the values our community is based on.’

I am clear that the Labour party itself has been guilty in the past of such gutter politics when we came up against the militant Islamic Respect Party in the Batley and Spen by-election. As some of the traditional Labour voters in the Muslim community were attracted to their demagoguery, Labour put out a scurrilous leaflet linking (then prime minister) Boris Johnson with India’s prime minister Narendra Modi.

There was a backlash from the Indian community. And quite right, too. What did the party think they were playing at? It was a mistake and happily not to be repeated. We must always appeal to voters on the basis of our values, not on the basis of identity.

In 1997 when Tony Blair made his first speech to the parliamentary Labour party, the first thing he said was not ‘we are the masters now’, but, ‘We are the servants now.’

If anything connects with the Indian community, it is sewa or service. It’s what the community is built on. It doesn’t matter whether you see it in a gurdwara, a mosque or a temple. But it’s based on sewa, on service.

I hope not. I really hope not. Because if we’re setting it up for that reason, it is doomed to fail. I don’t want 80, 90, a 100 per cent of any community to vote for just one party. Because I know if it does, it’s because they are regarded as a vote bank.

But if we are setting it up because we believe ‘all of you in the Indian community have values, have things we can learn from, have ideas, have innovation, have ambition, that we need to understand and harness for the good of our country.’ That’s the right reason. That’s the right purpose for this organisation.

All parties must not allow identity politics to infect our communities. We must stop those who want to import the politics and disputes of the subcontinent into our polity here in the UK. And we must stand up against those who want to use those disputes to harvest votes.

Leicester must be a warning to us all. No community has gained from those riots. Arrests have been made on both sides and both have debased the values of peace and respect which they claim to hold dear.

But political parties cannot control the mood of whole communities. Ultimately, it is for strong community leaders to steer their people away from hatred, and to call out people within their own ranks who would seek to make such hatred a means of asserting their own identity.