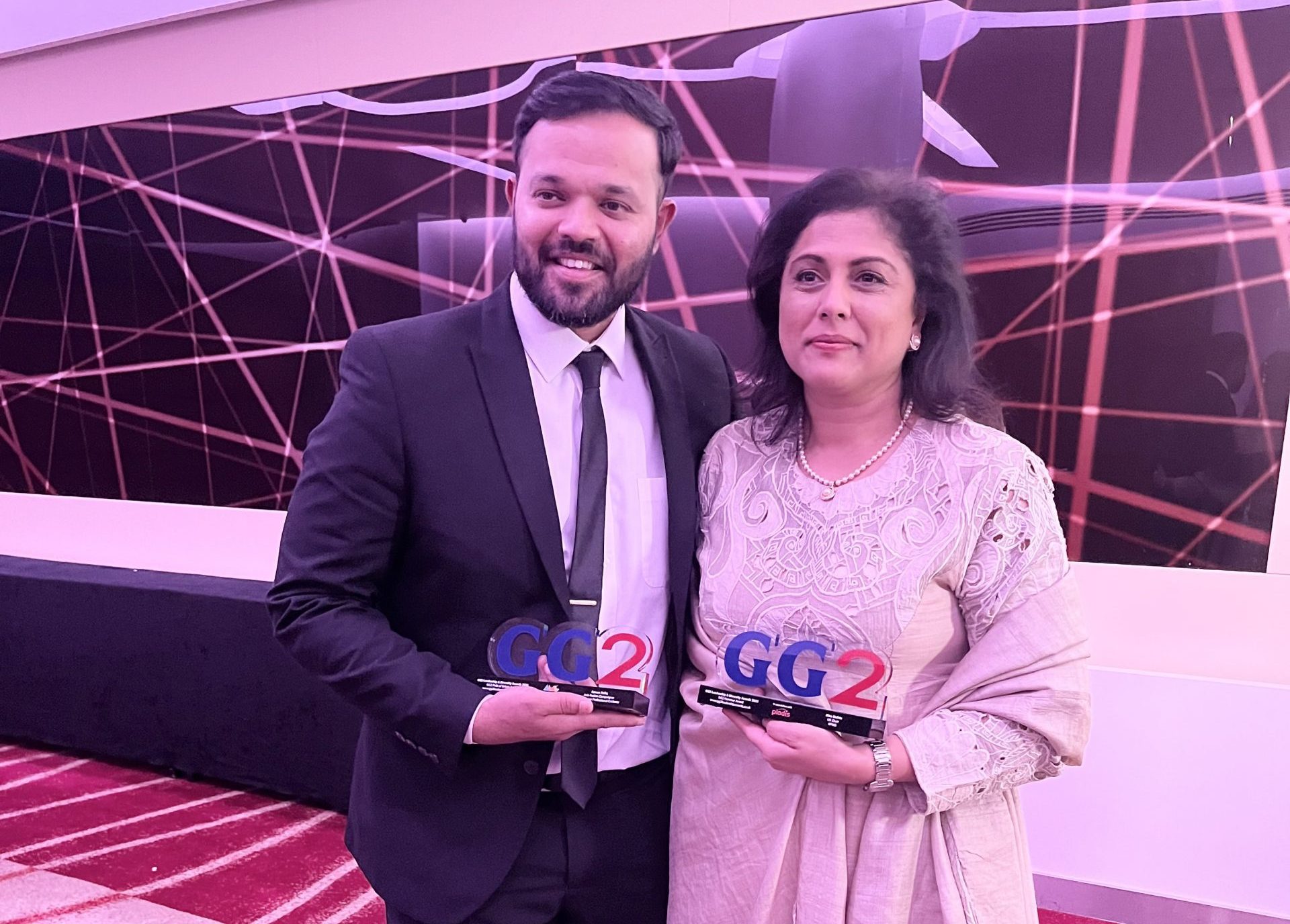 A NUMBER of remarkable women were amongst the winners at the annual GG2 Leadership and Diversity Awards, held at the Park Plaza hotel on Tuesday (8).

Binna Mehta took home the coveted GG2 Hammer Award, presented to a BAME person who has smashed the proverbial glass ceiling, for her rise to the head of KPMG UK, becoming the first female to head her 150-year-old company.

In her acceptance speech, Mehta who is passionate advocate for greater gender and ethnic diversity, “I want all the young women and girls out there to know that their dreams are possible. They will face obstacles, like I have in my 30-year career, but if they persevere and work hard they will come through and achieve great things.”

The extraordinary Captain Preet Chandi won the GG2 Inspire Award for being the first woman of colour to ski solo to the South Pole. Nicknamed Polar Preet, Captain Chandi continually defied the odds and has gone against conventions when it comes to what women can do.

Now in their 23rd year, the GG2 Leadership and Diversity Awards celebrate the achievements of Britain’s ethnic minorities. They are hosted by the Asian Media Group, publishers of Garavi Gujarat and Eastern Eye news weeklies, as well as Asian Trader and Pharmacy Business magazines.

“We highlight the work of remarkable people and shine a light on their achievements so others can follow in their footsteps.”

This year’s awards, which coincided with International Women’s Day, celebrated women like Jacqueline McKenzie, a well-respected human rights lawyer, who won the GG2 Outstanding Achievement in Law Award for spending years fighting for justice for over 200 victims of the Windrush scandal.

When England players Marcus Rashford, Jadon Sancho and Bukayo Saka were shamefully racially abused on social media following their penalty misses in the Euro 2020 final, three women, Amna Abdullatif, Huda Jawad and Shaista Aziz – known as the Three Hijabis, decided to take stand and launched a petition to ban racists from the game. Their petition struck a chord, reaching over a million people in just 48 hours. Their achievements were recognised with the GG2 Spirit in the Community Award.

The GG2 Young Achiever Award went to Soma Sara who went onto Instagram shortly after the broadcast of the drama series, I May Destroy You by Michaela Coel and created Everyone’s invited – a simple call for women and girls to anonymously share their experiences of rape culture – shockingly, it came to light that in nearly 3,000 schools, girls reported being routinely abused. Since March last year over 51,000 anonymous testimonies have been submitted to government with the aim of developing sustainable solutions.

Judge Kaly Kaul QC, who founded the Judicial Support Network, lifted the GG2 Woman of the Year Award, for her work in giving a much valued, and a much-needed voice to those justices who feel too intimidated and bullied into silence by the judiciary, too scared to speak up for their rights.

In all, 20 awards were presented on the evening.

Anti-racism campaigner Azeem Rafiq collected the GG2 Pride of Britain Award for his brave and tireless work to expose prejudice at Yorkshire and English cricket. His explosive testimony in a Parliamentary Select Committee exposed the shocking issues in the game. He vowed to continue to bring about long-standing change.

“I will continue to fight,” he said after collecting his award. “There are still too many people at Yorkshire, at the ECB who want to brush things under the carpet. They are not willing to tackle obvious racism within the game.”

Lord Karan Bilimoria, chairman and founder of Cobra Beer Partnership and president of the Confederation of British Industry (CBI), was the recipient of the inaugural GG2 Ram Solanki Beacon Award, named after the late founder of Asian Media Group (AMG) Ramniklal Solanki CBE.

Born into a military family, Lord Bilimoria campaigned tirelessly and raised funds to build a memorial to recognise the contribution of the five million men and women from the Indian subcontinent, Africa and Caribbean who served in the two world wars.

A keen and passionate voice in the cause of equality and diversity, he smashed through another glass ceiling in June 2020 when he became the first non-white President of the Confederation of British Industry. During his tenure, he has not only been a powerful advocate for business, but has put diversity and inclusion firmly on the agenda in the boardrooms of corporate Britain.

“This is one of the proudest moments of my life,” said an emotional Lord Bilimoria. “To receive this award, in memory of a great man in Ramniklal Solanki, is an absolute honour.”

Kick it Out chairman Sanjay Bhandari collected the GG2 Diversity Champion of the Year for his work in tackling racism in football. While Pladis’ Salman Amin was awarded the GG2 CEO of the Year. Amin has been credited with reviving the company, making global efforts to put diversity and inclusion at the top of the agenda, not being afraid of tackling difficult issues head on and invigorating everyone to the good fight.

Former BBC and Sky News presenter Lukwesa Burak was the master of ceremonies.

The GG2 Leadership Awards were sponsored by the Royal Air Force, Royal Navy and the Army.

GG2 D&I Initiative Award
Awarded to an individual or organisation for outstanding work in implementing an initiative with diversity and inclusion at its heart.

WINNER: School of Marketing and its GEN Z programme

GG2 Marketing Campaign of the Year
Awarded to an organisation who has made an outstanding and meaningful marketing campaign to promote the values of equality, diversity and inclusion in the workplace.

GG2 Advertising Agency of the Year
Presented to an organisation who has made an outstanding contribution to their clients’ successes and built a strong culture of creativity and originality.

GG2 Local Government Award
Awarded to a local council or government department for outstanding work in putting diversity higher up the agenda and promoting the values of equality, diversity and inclusion in the workplace.

GG2 Diversity Champion of the Year
Awarded to an individual or organisation for outstanding work in putting diversity higher up the agenda and promoting the values of equality, diversity and inclusion in the workplace.

GG2 CEO of the Year
Awarded to an individual who has demonstrated outstanding leadership, brings about change, innovation, and built a culture of belonging and inclusion across the organisation.

GG2 Spirit in the Community Award supported by Royal Navy
Awarded to an individual or organisation for outstanding work in the community.

WINNER:
Amna Abdullatif, Huda Jawad and Shaista Aziz
Founders, The Three Hijabis
This document is confidential and must remain under embargo until further notice

GG2 Young Journalist of the Year supported by Daily Mail
Awarded for outstanding work in the media.

GG2 Inspire Award supported by the British Army
Presented to an individual or organisation for outstanding work in the community, which has served to inspire young people.
WINNER:
Captain Preet Chandi
Physiotherapist, British Army

GG2 Achievement through Adversity supported by Maniyar Capital
Awarded to an individual who has achieved a high level of success despite difficult circumstances.

GG2 Young Achiever Award supported by the Royal Air Force
Presented to a young person aged 35 or under who has demonstrated outstanding leadership, brings about change and who is an inspiration to communities.

GG2 Outstanding Achievement in Science supported by Morningside Pharmaceuticals
Awarded to an individual who has made an outstanding contribution to the world of science.

GG2 Outstanding Achievement in Law
Awarded to an individual who has made an outstanding contribution to the legal profession.

GG2 Social Entrepreneur Award
Awarded to a cause-driven individual or organisation who has made an outstanding and meaningful contribution to society.

GG2 Inspirational Role Model Award
Presented to an exceptional individual who has shown resilience and passion to drive positive change in business and the community.

GG2 Pride of Britain Award
Awarded to an individual for outstanding contribution to society.

GG2 Woman of the Year supported by Maniyar Capital
Awarded to an individual for consistent high achievement.

GG2 Man of the Year
Awarded to an individual for consistent high achievement.

GG2 Hammer Award in association with pladis
Awarded to an individual who has broken through the glass ceiling.