Can you believe a chimpanzee paying for a pizza? If you don’t, WATCH this 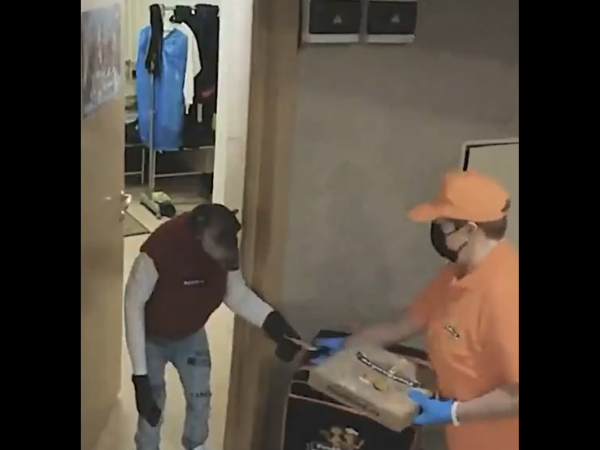 A chimpanzee pays a pizza delivery woman for the food in Russia. (Picture: Twitter screengrab/@PubityIG)

Chimpanzees are known to be among the most intelligent animals on the planet but how would you react to see one of them even paying a pizza delivery person for the mouth-watering food?

Recently, a video has gone viral on social media from Russia where a pizza delivery woman was in for perhaps the biggest shock of her life when she found a chimpanzee coming out to take the delivery and pay for it.

Chimpanzee paying for a pizza delivery in Russia 😳 pic.twitter.com/YCvlUUvwZt

In the video, the woman wearing an orange dress was seen taking out a box of pizza from her bag and knocking on the door. And to her utter surprise, she saw a non-human customer emerging out of the door — a chimpanzee in a sweatshirt, a pair of jeans and sneakers.

The woman was taken aback in the beginning but then she took the cash and handed over the box to the chimpanzee.

The video was captured by a CCTV camera outside the door and later uploaded on Twitter.

Many experiments conducted by scientists have shown that a chimpanzee’s brain works on par with humans.