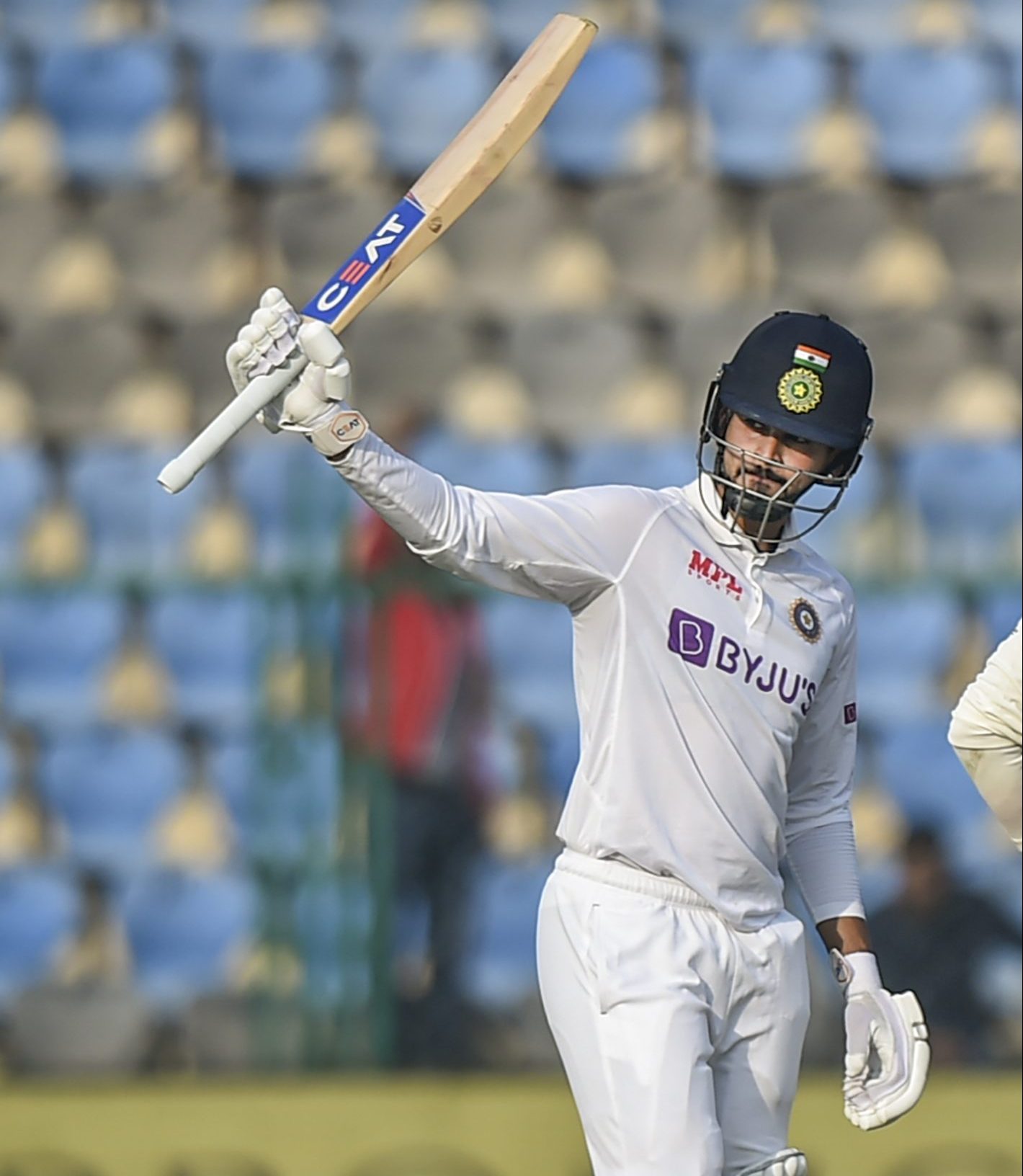 Shreyas Iyer after getting to his half-century on his Test debut. (PTI Photo/Arun Sharma)

If Gill’s 52 helped India overcome the early loss of opener Mayank Agarwal, Iyer’s unbeaten 75 prevented New Zealand from taking control of the contest after Jamieson had prised out three top-order wickets on the opening day.

Ravindra Jadeja also helped himself to an unbeaten 50 having raised 113 runs with Iyer for the burgeoning fifth-wicket stand.

Green Park Stadium’s dry, brown pitch had prompted both sides to pack three spinners but it was Jamieson who impressed the most with the ball on a slow track.

“Hopefully the new ball swings a bit in the morning and we can take a few wickets,” Jamieson (3-47) told the broadcasters after the day’s play.

“India are probably a fraction ahead, but we did well to have them four down.”

With several frontline players, including regular captain Virat Kohli, either rested or recuperating, India fielded a new opening pair after opting to bat on a hazy morning in the north Indian city.

Jamieson drew first blood, dismissing Agarwal caught behind for 13, but Gill had a longer, eventful stay.

The 22-year-old was wrongly adjudged lbw even before he could open his account, a decision that had to be overturned after replays confirmed an inside edge before ball hit pad.

Gill, then on six, was also lucky when Ajaz Patel’s half-hearted lbw appeal against him was turned down.

New Zealand were left to rue not reviewing that decision as subsequent replays confirmed the ball would have gone on to hit the middle stump.

Gill hit Patel for a six en route to his fifty and his second-wicket stand with Cheteshwar Pujara, who made 26, was worth 61 when Jamieson struck.

The towering seamer dismissed Gill in the first over after lunch when the opener dragged a good-length ball from outside the off-stump onto his stumps.

India’s stand-in skipper Ajinkya Rahane fell to Jamieson in similar manner after a fluent 35. Iyer nearly holed out in the deep trying to score his first test runs but soon figured out a safer way to do so.

He hit two sixes and seven boundaries and remained on course for a century in his first test innings. The test sides had last met in June when New Zealand triumphed in the World Test Championship final.