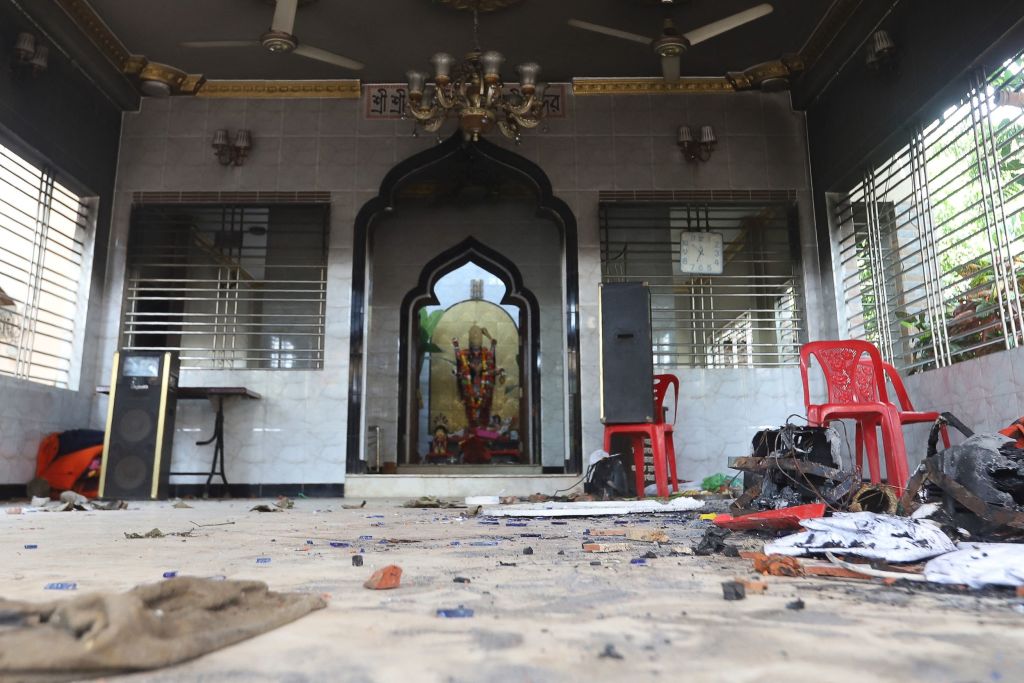 A vandalised Hindu temple in Comilla district of Bangladesh on October 14. (Photo by -/AFP via Getty Images)

INDIA on Thursday (14) expressed concerns over the reports of violence in neighbouring Bangladesh during the ongoing Durga Puja festival “disturbing” and said the Indian High Commission there along with the consulates are in touch with government and local authorities.

Arindam Bagchi, spokesperson for India’s ministry of external affairs, said in a weekly media briefing in New Delhi that the Indian government has taken note of the prompt action taken by the government in Dhaka to ensure that the situation was brought under control.

On Wednesday (13), communal violence broke out in several parts of the Muslim-majority Bangladesh after news broke on social media about alleged desecration of the Holy Quran at a Durga Puja venue on the bank of Nanuar Dighi, a lake in the country’s Comilla district. Some Hindu temples were also vandalised.

Several incidents of vandalism at Durga Puja pandals were reported subsequently. Four lives were reportedly lost in the violence while 60 people, including journalists, police officers and common people, were injured in the violence that broke out in Chandpur district. Many were injured in the incident in Comilla, Bangladesh daily The Daily Star reported. Reports of violence also came from Chattogram district’s Banshkhali and Cox’s Bazar district’s Pekua.

“We have seen disturbing reports of untoward incidents, involving attacks on a religious gathering in Bangladesh. We note the government of Bangladesh has reacted promptly to ensure the control of the situation including deployment of law enforcement machinery,” Bagchi said when asked about New Delhi’s reaction to the incident.

“We also understand the ongoing festive celebration of Durga puja continues with the support of the government of Bangladesh agencies and a large section of the public. Our high commission and our consulates are in close contact with government and other authorities and at the local level,” he added.

Bangladesh prime minister Sheikh Hasina, whose Awami League is known to be close to India, issued a stern warning to the perpetrators of violence saying those who attacked the Puja venues will not be spared.

“The incidents in Comilla are being investigated. Nobody will be spared. It doesn’t matter which religion they belong to,” she said while exchanging greetings with people of the minority Hindu community on the occasion of Durga Puja, which is also a popular festival in several parts of India.

The Bangladesh Hindu Unity Council said the incident in Comilla happened after “rumours of insulting the Quran” spread.

Spreading rumors of insulting the Qur'an, the puja mandapa of Nanua Dighi par in Comilla was attacked. https://t.co/KmljSISWFu pic.twitter.com/4oM1gS46yJ

Islamic radicalism has been on the rise in Bangladesh over the past few years and a number of free thinkers have been fatally attacked there, raising concerns in the neighbourhood.