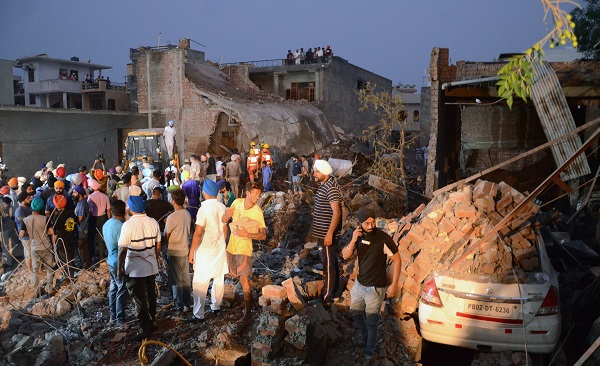 Onlookers gather at the site of a deadly explosion at a firecracker factory in Batala in northern India’s Punjab state on September 4, 2019. The blast killed 23 people and up to 27 injured after a massive explosion at a firecracker factory in northern India, as rescuers battled the flames in the search for survivors. (Photo: NARINDER NANU/AFP/Getty Images).

RESCUE operations on Thursday (5) continued at a firecracker factory site in India’s Punjab state where 23 people were killed and 27 injured in a powerful explosion, officials said.

Teams of National Disaster Response Force (NDRF) were trying to find out any person still trapped under the debris, they said.

Twenty-three people were killed in a blast at the firecracker factory located in a residential area on Jalandhar road in Batala of Gurdaspur district on Wednesday (4) around 16.00 IST.

The explosion had also damaged buildings nearby, shattering window panes and even bringing down the roofs of a couple of them.

The explosion was heard kilometres away, local residents said.

Several factory workers, some family members of the factory owner and a few passersby were killed in the explosion, officials said. Seven critically injured were referred to Amritsar medical college.

After the post mortem, the bodies will be handed over to the families of victims, they said.

Meanwhile, tempers ran high at civil hospital where some family members of victims sought action against those officials for failing to ensure closure of the firecracker factory despite repeated requests.

Batala senior superintendent of police Opinderjit Singh said the exact cause of the blast could be ascertained after the probe.

A forensic team from Chandigarh will soon reach the site to take samples, officials said. Punjab government has already ordered a magisterial inquiry into the incident.

An ex gratia of Rs 200, 000 for the kin of the each deceased and Rs 50,000 for the each of the seven severely injured had already been announced.

The impact of the blast was such that a few nearby buildings were damaged. Some four-wheelers were also damaged because of the impact.

The explosion was heard a few kilometres away, locals said. Punjab chief minister Amarinder Singh on Wednesday had directed both the civil and police administration to extend all possible help to the victims’ families in this hour of grief.

He had also directed the deputy commissioner to provide the best possible treatment to the injured free of cost besides asking the SSP to supervise the evacuation operations being carried out by the NDRF team.