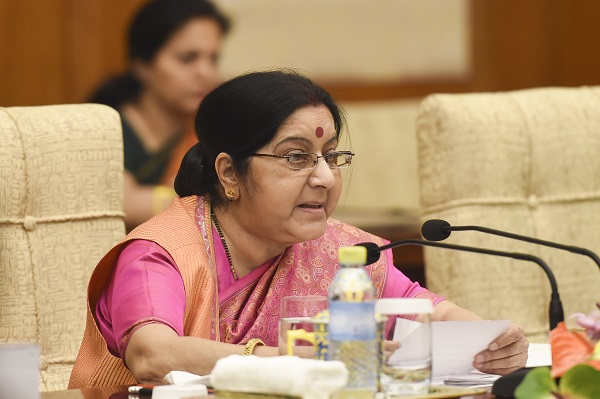 Leaders from across the globe remembered the veteran BJP leader, who died on Tuesday (6) night after a massive cardiac arrest at the age of 67, remembering her variously as “good friend”, “dear sister” and “extraordinary woman”.

The Bangladesh prime minister said her country had lost a “good friend”.

“She (Swaraj) was a good friend of Bangladesh. With her death, Bangladesh has lost a good friend. Bangladesh will recall her contributions in taking the relationship between the two countries to a new height,” Hasina was quoted as saying by bdnews24.

Iranian Foreign Minister Zarif recalled his “fruitful” discussions with her.

“My deepest condolences to the government and the people of India on the passing of former External Affairs Minister Sushma Swaraj. I had many fruitful and useful discussions with her while she held office, and am saddened by her sudden passing. May she forever rest in peace,” he tweeted.

Bahrain’s Foreign Minister Khalid bin Ahmed Al Khalifa  referred to Swaraj as his “dear sister” and said she always called him ‘My Brother’.

“She is not with us anymore. Rest In Peace ‘my dear sister’. India and Bahrain will miss you,” he tweeted.

The UNGA president said she was saddened by the news of Swaraj’s death and described her as an extraordinary woman and leader who devoted her life to public service.

“I had the honour of meeting her in my visits to #India, & will always remember her fondly. My deepest condolences to all of her loved ones,” she tweeted.

Calling her “Behinji”,  former Afghanistan president Hamid Karzai expressed his grief over the loss of a “tall leader” and”people’s person”.

“Deeply saddened to hear of the loss of Behinji Sushma Swaraj. A tall leader and a great orator and people’s person. My profound condolences to the people of India and her family and friends,” he tweeted.

Paying tributes to Swaraj, the Russian Foreign Ministry said on Twitter, “We express our sincere condolences to the people of #India on the passing away of the former FM of this friendly country @SushmaSwaraj.”

The French Ambassador to India Alexandre Ziegler said she was one of India’s most respected leaders who showed remarkable dedication to serving her fellow citizens and took the Indo-French relationship to new heights.

“I’m saddened to hear of the untimely demise of @SushmaSwaraj, Senior BJP leader & former Foreign Minister of India. My deepest condolences to the people & government of India on the loss of a distinguished public figure who represented her country w/ distinction & determination,” he tweeted.