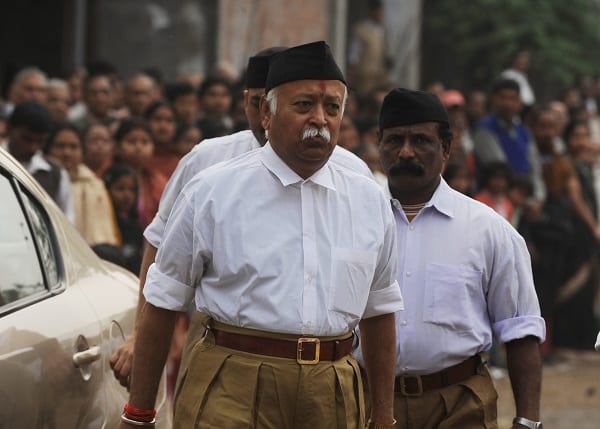 MAHATMA Gandhi had visited RSS shakha during the time of Partition, interacted with swayamsevaks and expressed joy over their discipline and the absence of divisive feelings over caste and creed among them, Rashtriya Swayamsevak Sangh (RSS) chief Mohan Bhagwat said.

Sangh swayamsevaks recall Gandhi and his values as part of their morning prayer in Shakhas, he said while referring to ‘Ekatmata Stotra’ which is recited in the daily gatherings of its workers.

“Gandhiji… visited a shakha near his place of residence in Delhi during the tragic days of Partition. He spoke to the swayamsevaks in the shakha. Its report was published in the Harijan, dated September 27, 1947.

“Gandhiji expressed his joy over the discipline of the Sangh swayamsevaks and complete absence of divisive feelings of caste and creed in them,” Bhagwat said in an article posted on the RSS website as the country celebrated the 150th birth anniversary of Mahatma Gandhi on Wednesday .

Gandhi had also visited a Sangh camp near Wardha in 1936 and next day RSS founder Dr Hedgewar met him at his Ashram. The contents of the long question-answer session and discussion are now in public domain, he said.

Emphasising on Gandhi’s Swadeshi vision for the country, the RSS chief said the Mahatma gave a thought process that was based on giving India its own identity in all spheres of life but people with “slavish mindset” accepted western set of values as a model.

He said Gandhi advocated Swadeshi philosophy as the West, on back of its political power, promoted its systems and lifestyle by distorting education and making others financially dependent.

“However, without understanding this, the people with a slavish mindset accepted the western set of values as a model, denouncing our forefathers, pride and culture as inferior and disgraceful and engaged themselves in imitating and flattering the West. Its massive influence is visible in the country’s direction and condition even today,” he said.

Gandhi pitched for “reorganisation of Bharat” based on self reliance, he said adding that the Father of the Nation firmly stood for social equality and harmony, translated his vision into action and had set an example for all through his life.

“We must perceive, understand and manifest it in our life. On account of this, even those who had minor differences of opinion with him also viewed with reverence,” he said while appealing to people to take a pledge to emulate Gandhi’s sacred, dedicated and transparent life and India-based life vision.