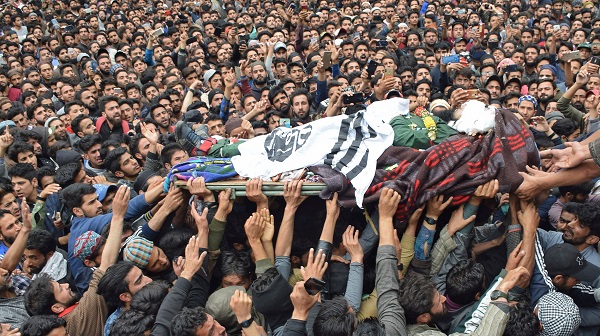 People carry the body of Naseer Ahmad Pandit, a separatist militant, during his funeral after he was killed in a gun battle with Indian soldiers, in Karimabad village in south Kashmir’s Pulwama district May 16, 2019 (Photo: REUTERS/Younis Khaliq).

INDIAN troops and separatist militants clashed in Kashmir today (16) and five people were killed including a civilian, officials said, the latest casualties in a new phase of violence in the 30-year insurgency.

Tension in Muslim-majority Kashmir has been high since a February 14 suicide bomb attack by the Pakistan-based Jaish-e-Mohammad (JeM) militant group killed at least 40 Indian paramilitary police.

Prime minister Narendra Modi gave troops a “free hand” to respond to the attack, and near-daily searches in villages in Kashmir since then have often triggered violent confrontations, with civilians caught in the crossfire to the alarm of rights groups.

Modi’s tough response to the bomb attack, which included an air strike against what India said was a militant camp in Pakistan, is believed to have given his party a boost in a general election that began on April 11 and ends on May 19.

Three JeM militants, including a Pakistani commander, and an Indian soldier were killed in the gun battle in Dalipora, a village in south Kashmir, which began in the early hours, police said.

Villagers said a civilian, who they identified as Rayees Ahmad Dar, 32, was also killed after Indian soldiers had sent him to search a house where militants were believed to be hiding.

Villagers in the area have complained before about the army using civilians as human shields in searches.

A police spokesman said Dar had been killed in indiscriminate firing by the militants, and denied he had been sent on a search.

After the clash, villagers threw rocks at security forces, who responded with teargas, while lawyers in the state’s high court went on strike in a protest over Dar’s death.

“Even in the holy month of Ramadan there is no letup in killings and bloodshed in Kashmir as civilians, armed youth or even Indian forces are getting killed,” Kashmir’s main separatist political group, the Joint Resistance Leadership, said in a statement.

The group called for a general strike in Kashmir on Friday (17).