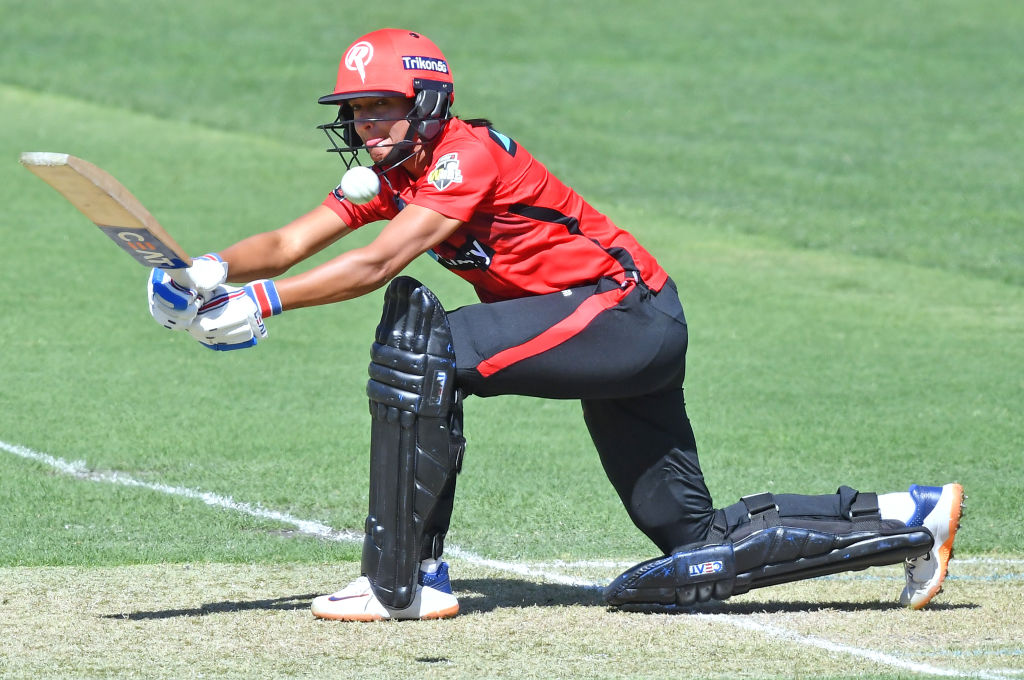 Harmanpreet Kaur in action for the Melbourne Renegades in WBBL 2021. (Photo by Mark Brake/Getty Images)

MELBOURNE Renegades star Harmanpreet Kaur on Wednesday (24) became the first Indian player to be adjudged as the player of the tournament in the Women Big Bash League (WBBL) 2021-22 in Australia.

The 32-year-old Kaur, who is India’s T20 international captain, was voted for the award over Perth Scorchers’ Sophie Devine and Beth Mooney with 31 votes, three more than her nearest competitors.

Kaur, who returned to the WBBL after a two-year absence, has been in fine form, scoring 399 runs in 11 innings at an average of 66 plus and claiming 15 wickets at an economy rate of less than eight runs an over. She also tops the list of six hitters with 18 maximum strikes.

The votes were awarded on a 3-2-1 basis by both standing umpires at the end of every game, meaning a player can get up to six votes in a match.

Kaur joined the club of New Zealanders Devine (twice) and Amy Satterthwaite as international players to get the competition’s top individual award.

“I’m extremely delighted, it’s something very big that I have achieved. I’m very thankful to my team and all the support staff, they have been great during this time and have supported me a lot. It’s been totally a team effort — I was just doing the job the team required from me,” Kaur said in a release.

“We have a team that has gelled together. We support each other and that’s what we have been doing. I haven’t put any extra pressure on myself, I’ve just enjoyed being here and supporting my teammates,” she added.

Kaur did not bat in the Renegades’ 43-run defeat to Brisbane Heat on Saturday (20) due to illness. She will, however, play for the Challenger against Adelaide Strikers on Thursday (25).

Sydney Thunder’s Phoebe Litchfield was named WBBL ‘Young Gun’. The Young Gun award is given to the best player aged below 21, as selected by Cricket Australia’s National Selection Panel.