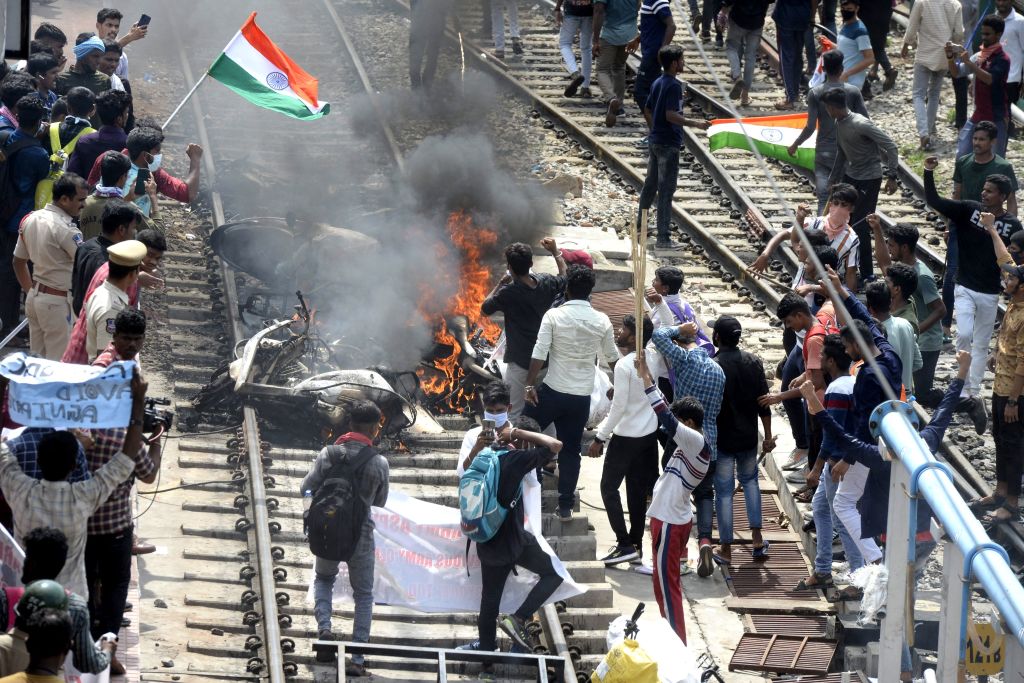 Protesters set vehicles on fire during a demonstration against the Narendra Modi government’s new ‘Agnipath’ recruitment scheme for the army, navy, and air forces at a railway station in Secunderabad in the southern Indian state of Telangana on June 17, 2022. (Photo by NOAH SEELAM/AFP via Getty Images)

ANGRY protests over the Narendra Modi government’s radical recruitment plan for the armed forces called ‘Agnipath’ turned deadly on Friday (17) with even person losing his life while many were injured. Massive properties were ruined as angry mobs set trains on fire, vandalised buses and other vehicles and even set an office of the ruling Bharatiya Janata Party (BJP) ablaze.

The government, however, defended the scheme calling it “transformative”. Indian defence minister Rajnath Singh said the ‘Agnipath’ scheme was a golden opportunity for young people to join the defence forces and serve the nation. He also said that prime minister Modi has a sensitive heart for India’s youth and their future.

However, the protesters were little convinced. Those aspiring to serve in the army were not happy with the four-year tenure they get and the application of the age criterion also made many of them ineligible for the service. They were upset over the uncertainty they face after their service even though the Modi government has assured that they would get employed after their service.

1 killed in police firing in Telangana

One person was killed in police firing while 15 were injured in Secunderabad in the southern Indian state of Telangana while violent protests were witnessed in states such as Bihar, West Bengal, Uttar Pradesh, Madhya Pradesh and Haryana.

In Bihar, deputy chief minister Renu Devi was attacked amid protests against the recruitment scheme. “Such type of violence is very dangerous for the society. The protesters should remember that this is a loss for the society,” Devi told India’s NDTV news channel.

Bihar has seen a massive protest and violence since it all started on Wednesday (15), a day after the scheme was unveiled by the government. In Madhepura in the same state, a mob of more than 500 protesters ransacked an office of the BJP, which is an ally of the state’s ruling party, and set it on fire. In the state’s Danapur railway station, 24 protesters were arrested. In Sasaram, a toll plaze was burnt down, NDTV reported.

#Agnipath Protests | A mob of over 500 protestors ransacked and arsoned the BJP office in Madhepura, Bihar. pic.twitter.com/5RfzLX1GDN

Also in Uttar Pradesh’s Aligarh, a vehicle inside a police outpost was set on fire by a mob protesting against the ‘Agnipath’ scheme. The outpost was also ransacked.

In UP's Aligarh, a car inside a police outpost set on fire by mob agitating against Agnipath scheme. The outpost was vandalised by the miscreants. pic.twitter.com/vcsob4UYQN

In UP’s Varanasi, several roadways buses and private vehicles were vandalized by mob on streets protesting against the centre’s Agnipath scheme. pic.twitter.com/1VvjyAjUiV

The Indian Railways said that more than 200 trains were affected in the violence. Thirty-five trains had to be cancelled while 13 were short-terminated since the protests erupted.

In Gurugram, the local administration has imposed Section 144 as a precautionary measure even though no fresh protest was reported on Friday against the ‘Agnipath’ scheme.

In West Bengal, the protesters were seen blocking the Howrah Bridge against the ‘Agnipath’ recruitment scheme.

Haryana’s Rohtak was witness to another tragedy as an aspirant, who was preparing for two years to serve in the army, committed suicide as the ‘Agnipath’ scheme crushed his dream after the pandemic which also disrupted his dream. A similar incident happened in the eastern state of Odisha. He took the drastic step after the written exam being was cancelled due to the introduction of the ‘Agnipath’ scheme, the India Today reported.