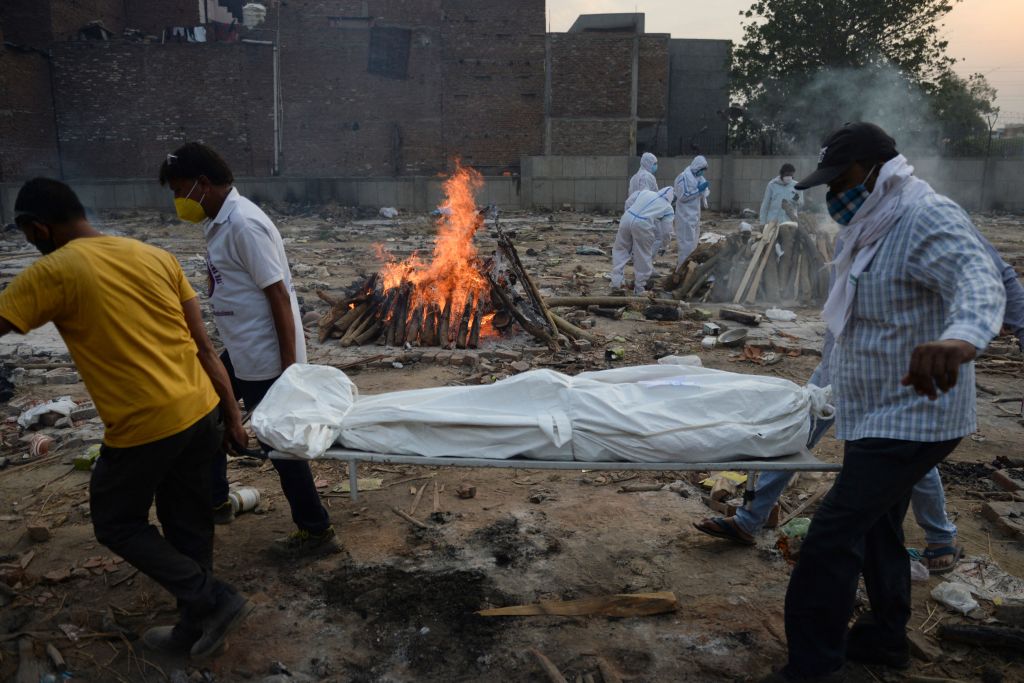 Relatives cremate the bodies of their loved ones who died due to the Covid19 at a crematorium in New Delhi, India, on May 11, 2021. (Photo by ARUN SANKAR/AFP via Getty Images)

INDIA’S official coronavirus death toll is around 415,000 but the actual number is up to 10 times more, which makes it the country’s worst humanitarian disaster since independence in 1947, an American research group said on Tuesday (20), AFP reported. The US officially leads the death toll with more than 609,000 while Brazil is at the second position with 542,000.

A study conducted by the Center for Global Development, Washington DC, has come up with an estimate of deaths which is highest as of now in India, the second most populous nation in the world with nearly 1.4 billion people. The country witnessed a havoc in the months of April and May when the second wave engulfed it, leaving its entire health infrastructure in a turmoil.

The study, which analysed data from the start of the pandemic to June this year, suggested that between 3.4 million and 4.7 million people had died in the pandemic.

“True deaths are likely to be in the several millions, not hundreds of thousands, making this arguably India’s worst human tragedy since partition and independence,” the researchers said.

The report was based on estimating “excess morality”, the number of extra people who died compared to the pre-crisis toll.

The authors of the report included Arvind Subramanian, a former chief government economic adviser to the Narendra Modi government and they prepared the report partly by analysing death registrations in some states and a recurring national economic study.

The researchers, who also included an expert from Harvard University, said that estimating morality with statistical confidence was not easy. “(But) all estimates suggest that the death toll from the pandemic is likely to be an order of magnitude greater than the official count,” they said.

Christophe Guilmoto, an Indian demography expert at Research Institute for Development, Marseille, France, estimated this month that the death toll was around 2.2 million by late May.

India’s death rate per million was nearly half the world average and according to Guilmoto, “such a low figure contradicts the apparent severity of a crisis that has struck most Indian families across the country”.

Guilmoto’s team said that only one coronavirus death in seven was recorded.

A model by the Institute for Health Metrics and Evaluation, Seattle, US, estimated that the Covid toll could be more than 1.25 million.

In June, India’s health ministry slammed The Economist magazine for reporting that the excess deaths were between five and seven times more than the official toll, describing it “speculative” and “misinformed”.

In May, a World Health Organization report said up to three times more people had died around the globe during the pandemic — from coronavirus or other causes — than shown by official statistics.