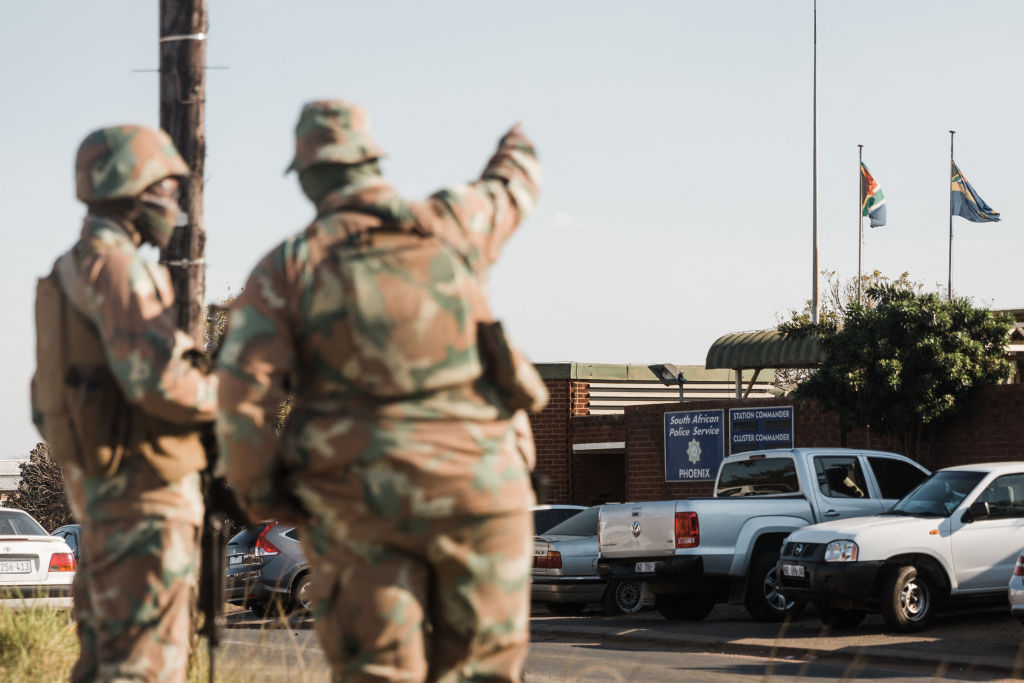 Members of the South African National Defence Force deployed outside the Phoenix Police Station in Phoenix township, north of Durban in the wake of the violence in the country in July. (Photo by RAJESH JANTILAL/AFP via Getty Images)

DESPITE the Indian-origin people in South Africa being assured by authorities and activities, it has been reported that they are receiving WhatsApp messages that are threatening renewed or “Part II” of the deadly violence that engulfed the southern African nation in July following the arrest of former president Jacob Zuma on charges of contempt of court after he failed to cooperate with a commission looking into alleged charges of corruption during his stay in power.

According to a recent report by Indian daily Times of India, an uneasy calm settled over the provinces of KwaZulu-Natal and Gauteng that had been badly hit by the violence. Several lives were lost in the riots while massive property was damaged.

The report said that the Indians have been asked to return from where they came.

Kimeshan Raman, a resident of Durban and social activist, who has recently applied for an Overseas Citizenship of India card, said it was a panic reaction. He said messages and videos were being circulated targeting Indians and they needed to protect their families at this hour.

Indian-origin South Africans have gone back to the panic mode and many of them admitted that they have applied for the OCI cards were in the process of doing so, the Times report added.

Potential applicants have blamed poor upkeep of documents and the lackluster response of the Indian Embassy in South Africa. The Indians are scared of facing another round of violence.

Ela Gandhi, granddaughter of India’s freedom movement hero Mahatma Gandhi and a South Africa-based activist, told the Times that while they are trying to unite people across racial lines and build peace and goodwill, uncertainty and insecurity exist because of threats from certain sections.