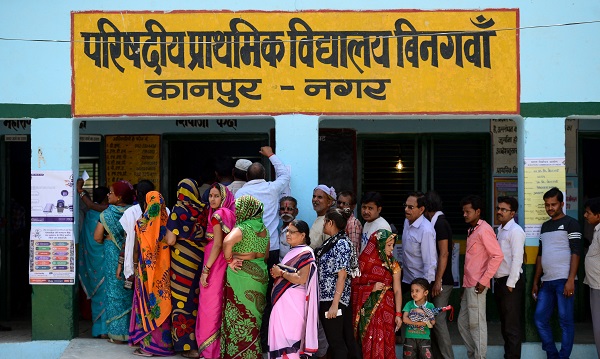 Indian voters stand in a queue to cast their vote at a polling station, in Kanpur on April 29, 2019 (Photo: SANJAY KANOJIA/AFP/Getty Images).

“India’s intelligence” will shine through the crucial elections that will shape the country’s future, she said.

“This election season, 900 million Indians have the opportunity to go to one of our one million polling stations and have their say in the country’s future,” SP Shanu said.

“In a country facing entrenched poverty and inequality, at a point when humanity is facing existential challenges, the stakes in this election have never been higher. This is no time for voters to be swayed by passing trends, by social media fame and easy promises,” she said.

SP Shanu identified poverty eradication, equality, combating terrorism and the environment as the key issues motivating the Indian voters, adding that only when India becomes a global leader on all of those issues will “we as a nation find true balance and harmony”.

“India’s intelligence will shine through this election. For the sake of our future, I hope that whoever is elected will bring the same intelligence to their period in power, and combine that intelligence with a love for this country and its people,” she said.

SP Shanu, recently conferred as Professor of Leadership at the University of Bolton Institute of Management, UK, stressed that there is a need for “serious and rational” debate about the issues that will determine the country’s future.

“The complexity of our national identity and political discourse mean that our politics cries out for balance. Political candidates need to balance the competing demands of different sections of our society, and to find a balance in their policies that promote the welfare of all Indians,” the Chair of the Hinduja Bank, Switzerland said.

Underscoring the message of her father, renowned business tycoon and philanthropist Srichand P Hinduja to always “think of the cause”, she said looking at the underlying root causes that motivate voters in these elections can help find a path to balancing their interests.

“In this year’s elections, four themes have stood out for me as root causes of the country’s ambitions, anxieties and ailments. I have always believed that India, as a nation, shows its intelligence when it comes together to vote,” she said.

SP Shanu the Chair of the Hinduja Foundation US, said the first key this election is economic growth and equality.

Citing the World Bank, she said that one in five Indians lives in poverty and the poorest in the society is twice as likely to be illiterate than those above the poverty line, and much more likely to lack access to basic services like sanitation and electricity.

“We all have a duty to promote true equality, and inequality will always lead to anxieties – economic, political and spiritual,” she said.

The second theme of this election concerns gender inequality. While women constitute over 50 per cent of the world’s population, they continue to be under-represented in voting figures, as candidates and as parliamentarians.

“Only 11.2 per cent of our elected parliamentarians are women. Female inclusion, participation and female political empowerment are vital human rights and critical to abolishing gender inequality,” SP Shanu said.

Outlining terrorism as the third key issue, she said that one of the reasons international terrorism is so persistent and hard to tackle is because it is so responsive to the world events.

“There are no easy answers prevent terrorism, but a mix of support for security forces, healing and unity at home, and intelligent foreign relations are all part of the path we must walk to prevent future tragedies,” SP Shanu said.

She stressed that climate action and environmental balance is an issue that affects the future of the whole human race.

“The planet is threatened by ever increasing carbon emissions and a changing climate, while the air in our cities gets harder and harder to breathe. If we are to take our rightful place on the world stage, we cannot treat this as an issue for others to contend with or a lower priority cause,” she said.

SP Shanu underscored that “our intelligence as a voting public does not mean that we always agree on the right candidate. It means that the issues that motivate our voting decisions are the same issues that determine our country’s future”.

She said that as the Chair of Hinduja Bank (Switzerland), she helps her clients to bridge East and West.        “One of my roles is to look at evolving demographic and economic trends, particularly in countries like India,” she said, adding that she finds hope for India’s future in the country’s young people.

“With the right political leadership, our country’s youth can achieve more than any generation before them,” SP Shanu added.

Lok Sabha elections are being held in India in seven phases. The polling began on April 11 and would be over on May 19, followed by counting of all votes on May 23.