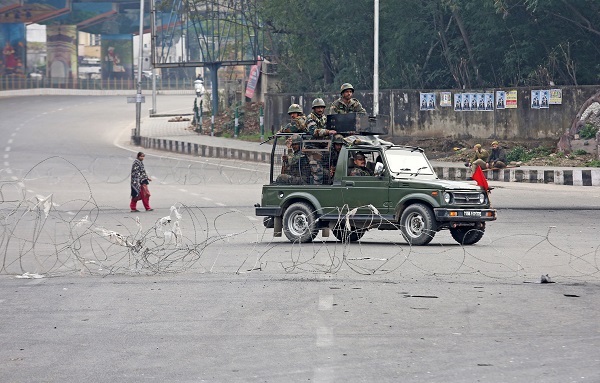 The Indian commander in its part of divided Kashmir, Lieutenant-General KJS Dhillon accused Pakistan’s main Inter-Services Intelligence (ISI) spy agency of “controlling” the deadliest attack on security forces in three decades of insurgency in the Muslim-majority region (Indian Army soldiers in a vehicle patrol a street as a woman walks past during a curfew in Jammu. REUTERS/Mukesh Gupta).

India’s top military commander in Kashmir on Tuesday (19) told mothers to get their militant sons to surrender or see them dead, as security forces intensified a crackdown in the disputed region after a suicide bomber killed 40 paramilitary police.

The Pakistan-based Jaish-e-Mohammad (JeM) militant group claimed responsibility for Thursday’s attack on a security convoy, but the Pakistani government has denied any link to the blast, which has ramped up tension between the nuclear-armed rivals.

Indian prime minister Narendra Modi, facing a general election by May, has come under domestic pressure to exact revenge, and has said he has given a free hand to security forces to administer a “strong response”.

Pakistani prime minister Imran Khan denied in a televised address that his country had anything to do with the bombing. He said Pakistan and was ready to talk with India on terrorism but would retaliate if attacked.

“I would request all the mothers in Kashmir to please request their sons who have joined terrorism to surrender and get back to the mainstream,” Dhillon told reporters in Srinagar, the summer capital of Jammu and Kashmir state.

“Otherwise anyone who has picked up the gun will be killed.”

The bomb attack was carried out by a 20-year-old man whose parents said had joined a militant group after being beaten by Indian troops three years ago.

India has long blamed Pakistan for the nearly 30-year revolt in Jammu and Kashmir, its only Muslim-majority state.

Muslim Pakistan says it only provides moral and diplomatic support to the Kashmiri people in their struggle for self-determination.

Pakistan has condemned the bombing and on Tuesday it appealed to the United Nations to intervene, in light of the deteriorating security situation.

“Attributing it to Pakistan even before investigations is absurd,” Pakistan’s Foreign Minister Shah Mahmood Qureshi said in a letter to the UN Secretary General Antonio Guterres seeking UN involvement to lower tension.

“It is with a sense of urgency that I draw your attention to the deteriorating security situation in our region resulting from the threat of use of force against Pakistan by India,” he said.

The United States had told India it supported its right to defend itself against cross-border attacks, India said.

Indian forces on Monday (18) killed three militants, including the suspected organiser of the bombing, in a 17-hour military operation in which five troops and a civilian were also killed.

Dhillon said one of the militants killed on Monday was from Indian Kashmir while the other two were from Pakistan.

“It was being controlled from across by ISI and Pakistan and JeM commanders,” Dhillon said of the bomb attack.

Dhillon did not provide any proof for his accusation and said he could not be more specific about the investigation into the blast and the suspected role of the Pakistan military intelligence agency, except to note its close links with the JeM.

Jammu and Kashmir, a former princely state on the border between India and Pakistan, has been in dispute since the partition of India in 1947. Control is split between the two countries but each claims the region in full.

The neighbours have fought three wars since 1947, two of them over Kashmir. They have fought countless skirmishes along their de facto border, which the United Nations monitors, in the Himalayan region.

The bomb attack has sparked outrage in India with calls for revenge circulating on social media, and rising animosity towards Kashmiri Muslims in other parts of the Hindu-majority country, to the alarm of rights groups.

The government has warned against rising communal tension.