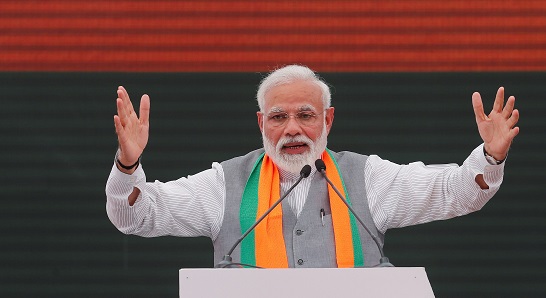 Under Indian election rules now in effect, the publication of any content deemed as campaign material including advertisements, films and even social media requires the election commission’s prior approval (Photo: REUTERS/Adnan Abidi/File Photo).

India’s top court today (9) dismissed an appeal to delay the release of a Bollywood biopic about prime minister Narendra Modi that the opposition says is propaganda, until after India’s mega-election.

The Supreme Court threw out the petition from the opposition Congress party, saying the biopic was not even certified yet and the matter should be considered by the election commission (EC).

Under Indian election rules now in effect, the publication of any content deemed as campaign material including advertisements, films and even social media requires the election commission’s prior approval.

Congress says the film is flattering of Modi and has slammed the timing of its cinematic release as hundreds of millions of Indians prepare to start voting in a national election this week.

It has lobbied for the movie which tells the story of the leader’s ascent to power from his days selling tea at a train station be withheld from cinemas until voting in the mega-elections ends on May 19.

But in its ruling, the three-judge bench said “too much of court’s time was being wasted on non-issue”.

“It will be premature for this court to decide since the film is yet to be certified.” it said.

India’s election commission was expected to announce last week whether it would block the film’s release because of the election.

A spokesperson for the commission declined to comment after the court’s ruling.

Filmmakers postponed the scheduled release from April 5 after failing to get a censor’s certificate on time.

The film’s producer, Sandip Singh, thanked the court “for the much deserved justice”.

“Our film, ‘PM Narendra Modi’ to release on 11th April 2019. Jai Hind (Hail India),” he posted on Twitter after the ruling. Voting in the first phase of the Indian election begins the same day.

Congress told the election commission that the film was “no artistic venture. It is a political venture”.