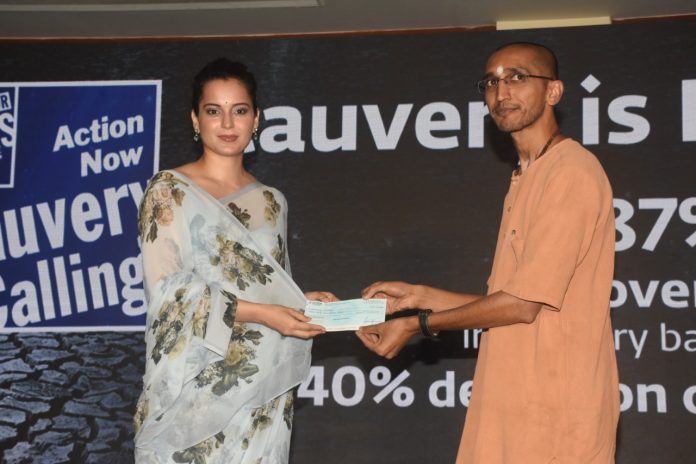 INDIAN actress Kangana Ranaut is one actress who has always supported social and environmental initiatives. The actress has been associated with Isha Foundation and has spoken about how Sadhguru’s teachings have transformed her.

From the past few days, Kangana has been spreading the message of Cauvery Calling by urging people to grow more trees. Earlier, the actress had stated that she will donate a chunk of her earnings for the cause and today at a press conference she donated Rs 4.2 million to Isha Foundation for the same. The huge amount will help in plant 100,000 saplings across the Cauvery basin. At the press conference, the actress urged people to donate as per their capabilities.

During the media interaction, Kangana said: “When I hear things about Amazon being on fire and Aarey trees being cut, I really get panicked but I don’t want everyone to get panic attack about that. Instead, we should do our bit and donate to plant trees so that we can solve an existing problem.”

“We cannot expect under-privileged people to donate. The people who can must donate at least two saplings on behalf of them. This will bring a huge change in our environment. Being a part of this initiative will also set a module for the coming generations and our generation will set an example that we stood up to save our environment,” she added.

Talking about Kangana’s films, the actress will next be seen on the big screen in Panga which is slated to release in January next year. She also has Jayalalithaa biopic titled Thalaivi in her kitty. The actress will show us her action avatar in the film Dhaakad which will hit the screens in Diwali next year.